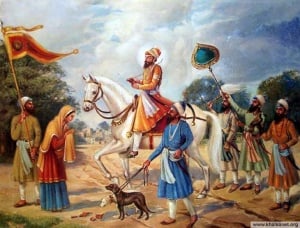 Mai Sulakhani Ji, was a Childless women from a Sandhu Jatt family of Chabba village in Amritsar District of Punjab. After the battle against the Mughal army in the year 1628, in which 13 Sikhs became martyrs for the Panth, and it was Waheguru's victory, Guru Sahib visited Chabba in 1628, In that village lived a woman named Mai Sulakhani. Sulakhani had been married for many years but was yet without any child. She asked many learned people how she might have a child and they all replied, 'there has been no child written in your destiny.' Mata Sulakhani heard about the greatness of Guru Hargobind and was convinced he would help her. Guru Hargobind was passing near her village of Chabba and Mata Sulakhani went to wait for him on the path holding a pen and ink. When Guru Sahib approached, she called out in a rhyme which translated is, 'Oh one with a beautiful beard and white dastaar, I make a request before Guru Hargobind! My name is Sulakhani and my village is Chabba, I am without any offspring and want to bear children.' Guru Hargobind Sahib smiled and said, 'Maiee, it is not written in your destiny.' With great faith, Mata Sulakhani replied, 'You are the one who is the writer here and you were the writer before, so if you have not written already, then write it now!' Guru Sahib took the pen and while still on his horse began to write a 1, Guru Sahib's horse kicked his hoof and the 1 became a 7. Mata Sulakhani did indeed go on to become the mother of 7 sons and they became Sikhs.