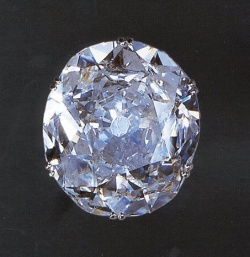 The ‘Kŝh-i Nūr’, which means "Mountain of Light" in Persian, also spelled Koh-i-noor, Koh-e Noor or Koh-i-Nur, is a 105 carat (21.6 g) diamond that was once the largest known diamond in the world. The Kŝh-i Nūr originated at Hyderabad, Guntur district in the state of Andhra Pradesh in India.

It has belonged to various Hindu, Mughal, Persian, Afghan, Sikh and British rulers who fought bitterly over it at various points in history and seized it as a spoil of war time and time again. It was finally seized by the East India Company and became part of the British Crown Jewels when Queen Victoria was proclaimed Empress of India in 1877.

Link with the Sikhs

During the period from about about 1750 to about 1810, Afghan invaders attacked India several times. They not only randomly massacred thousand innocent Indians, but also looted her property and honor. In 1739 the Persian chieftain Nadir Shah conquered Delhi and left India for his home, laden with enormous booty, which included the famous Koh-I-Noor, the bejeweled peacock throne and thousand of slaves.

When Nadir Shah was murdered in 1747, his most trusted general, Ahmad Shah Durrani, ruled Afghanistan and attacked India nine times. In 1748 he conquered and plundered Lahore. During his 5th invasion in 1761, he defeated the Marathas in the Battle of Panipat. In February,1762 he mercilessly killed thirty thousand Sikhs at Kup near Malerkotla. He also blew up Harimandir Sahib at Amritsar with gunpowder. His attacks and looting are recalled to this day in the old Punjabi saying:-Khada Pita lahe da, Rahnda Ahmed Shahe da. ( What we eat and drink is our own; the rest will go to Ahmad Shah.)

After his death in 1772, his son, Timur Shah, ruled Afghanistan for 21 years. He invaded five times, sacked western Punjab and killed many innocent persons. His son, Shah Zaman, attacked India four times, but could not reach Delhi due to confrontation by the Sikhs. He captured Lahore, but the Sikh army did not allow him to enter Amritsar.

Ahmad Shah’s sons began to quarrel among themselves and there was confusion and anarchy. Shah Zaman’s step brother, Mahmud dethroned, blinded and imprisoned Shah Zaman in 1795. Another brother Shah Shuja overpowered Mahmud, took his place, firmly installed himself and also acquired the Koh-I-Noor, but Shah Shuja’s success was short-lived as Mahmud dethroned him in 1809.

Shah Shuja with his wife Wafa Begam and other members of the family left Kabul for Punjab. The Governor of Attock arrested Shah Shuja and sent him to his brother, Ata Muhammad Khan, governor of Kashmir who not only imprisoned Shah Shuj) in the fort of Koh-i-Maran, but also tortured him in an attempt to get the Koh-i-Noor. However Wafa Begam with other members of the family and much of the treasury, including the Koh-i-Noor managed to escape. Shah Zaman who had attacked Punjab four times joined her at Rawalpindi and they went to Lahore where Maharaja Ranjit Singh gave them asylum in 1812.

So there they were, the Afghan royal family, the very people who had been invading and looting the Punjab and beyond for years, on Maharaja Ranjit Singh’s doorstep begging for his help. Rather than holding them as prisoners, trying to hold them for ransom or taking away the treasure they had escaped with, the Maharaja received them graciously, even granting them a pension. Wafa Begam was given Rs.4, 000 per month to meet the expenses of the whole family. In December, 1812, Wazir Fateh Khan of Afghanistan sought Ranjit Singh’s military help to oust Ata Khan from Kashmir and offered to share any booty. Wafa Begam feared that her husband would be murdered if he was rescued only to fall into Wazir’s Khan's hands who also hoped to find out where the Koh-i-Noor was hidden. Wafa Begam promised to give Ranjit Singh the Koh-I-Noor if he would rescue her husband from captivity and bring him safely to Lahore.

Shah Shuja was given a royal reception at Lahore and delivered to his wife, Wafa Begam. She was asked to make good on her promise and hand over the Koh-i-Noor to Ranjit Singh. The Begam avoided parting with the diamond and said that it had been pawned to a moneylender at Kandahar. Shah Shuja also made excuses.

Ranjit Singh understood her reluctance and offered to make a token payment of 3 lac rupees and a jagir of Rs. 50,000 to the family. Even this offer failed to bring the Begam around. Now Ranjit Singh got angry and placed a heavy guard on the Afghan family lest someone should escape with the diamond. After some days, Shah Shuja invited Ranjit Singh to his house and handed over the fabulous diamond to Ranjit Singh on 1st June, 1813.

Shah Shuja was not reduced to penury by this loss. He continued receiving allowance from the Sikh kingdom and owned considerable wealth in gold and jewels.

These facts are based on the autobiographical sketch written by Shah Shuja himself. Some historians, inimical to Ranjit Singh, have distorted this episode. If Ranjit Singh had wanted to rob the Begam, no one could have stopped him from doing so. He did not use any force and adopted an honorable course. Thus, after 74 years, Ranjit Singh recovered the Indian treasure looted from Delhi in 1739.