Mahant Kahan Singh Ji 'Seva Panthi' is the 13th spiritual descendant of Bhai Kanhaiya Ji. He was anointed as the Mahant of Tikana Bhai Jagta Ji on January 15, 2008 by Mahant Tirath Singh Ji himself. Mahant Sahib was the natural choice for this great honor, as he is considered a great soul by the entire Sikh Sant Samaj in India. He is most unassuming considering the position he has been anointed to. Mahant Sahib has been serving sangats in the villages of Punjab for over 50 years and is loved by everyone who has ever had the great fortune of meeting him. When visiting Tikana Sahib one finds Mahant Kahan Singh Ji still straightening white sheets in the Main Divan Hall or teaching children Gurbani in his room. He is considered one of the most eminent scholars of the Sikh Scriptures today. 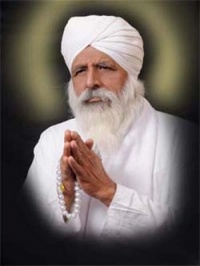 Mahant Kahan Singh Ji was born on September 15, 1943 at Dullewala, in district Mianwali, now in Pakistan. His father, Bhai Deep Singh was a devout Amritdhari Sikh who had been been baptized by Khande Ki Pahul. He was a deeply spiritual man who recited Gurbani regularly. When India was partitioned, young Bhai Kahan Singh was barely four years old. His father brought him and the rest of their family to India and settled near Chheratha(near Amritsar). A few months later the family moved to Goniana Mandi, a renowned grain and cotton market in district Bathinda(Punjab). In 1948, by great good fortune, or as willed by Akal Purakh Vaheguru, young Bhai Kahan Singh has a chance to meet Mahant Gulab Singh Ji, following which he visited Tikana Sahib a few times. In 1950, his parents assigned him to serve at the Tikana Sahib permanently. Subsequently, Mahant Bhai Asa Singh Ji got him enrolled in a Primary School for a few years and then decided to shift his education back to the Tikana Sahib by arranging a private tutor, Bhai Pokhar Dass coached young Bhai Kahan Singh in Gurmukhi and Gurbani. Mahant Asa Singh Ji paid special attention to his progress. Under his watchful eye and keen guidance from his tutor, young Bhai Kahan Singh memorized several compositions of the Gurbani, namely, Sukhmani Sahib, Japji Sahib, Baawan Akhri, Anand Sahib, Kirtan Sohila and Rehras Sahib. Mahant Asa Singh Ji further encouraged him to receive etymological knowledge and learn annotation of Sikh Scriptures and under his supervision young Bhai Kahan Singh blossomed into a excellent scholar. He also learned to play the harmonium and the tabla and started to attend classes on exegesis of the scriptures like the Guru Granth Sahib, Suraj Prakash and Sant Rattan Mala etc. He became such an expert on exegesis that Mahant Sahib initiated a program to enlighten a very dedicated sangat, with the exegetical annotation of the Guru Granth Sahib from the very beginning to the end. This endeavor took several years each time. The third time Sant Bhai Kahan Singh Ji played a major role in the process that took '9 years'. The exegetical annotation is being performed for a fourth time now and Mahant Baba Kahan Singh Ji is the main helmsman in this extraordinary effort. He was baptised by the Khande Ki Pahul in 1958 and since then he has inspired thousands of Sikhs to do the same.

Mahant Sahib was a praiseworthy disciple, totally devoted to fulfilling his Master's commands will love and alert in his service. He was always obedient and spent most of his spare time attending to Mahant Asa Singh Ji. For 23 years Mahant Sahib slept on the floor and never lay on the cot while serving Mahant Asa Singh Ji. Whenever there was a construction project at the Tikana Sahib, Sant Bhai Kahan Singh Ji, was a selfless laborer. He worked harder and longer hours than the paid laborers. In addition, he served the sangat in the langar hall, everyday. There are quite a few episodes that highlight his obedience and loving service. One instance that will illustrate his dedication, was: Mahant Asa Singh Ji was an early riser. He was accustomed to leaving his bed at 1 A.M. daily, without fail. One day, he gently asked Bhai Kahan Singh Ji to avail him of some water in a bucket as he had to go out to answer the call of nature. Bhai Kahan Singh Ji was in his slumber. He suddenly left his bed. Half asleep, he ran to the kitchen and lit the oven at that odd time. He had indeed, misheard what he had been ordered to do. He never asked how or why. He knew only to obey and did not wait to consider the appropriateness of an order given to him. Until the age of twenty three, serving Mahant Bhai Asa Singh Ji with devotion, and living with Mahant Bhai Asa Singh Ji, he never dared to sleep on a cot, in his presence. He always laid his bed on the floor.

Once he asked Mahant Bhai Asa Singh Ji, "My mind often wanders towards mammonish attachments. Are there any means to impede it? Mahant Bhai Asa Singh Ji replied, “Yes, there is one way. Completely involve your heart and mind, determinedly, in the service of humanity and it will come into poise by itself.” Bhai Kahan Singh Ji followed that advice and grew spiritually from strength to strengh. Continuous reciting of Gurbani and the service of Mahant Asa Singh Ji came to him, naturally. He grew to be a very well informed Gursikh, conversant with all aspects of the Sikh faith. His associations with various Sadhus of the Seva Panthi Samprada and other Sampradas enlightened him further. With the kind encouragement provided by Mahant Asa Singh Ji, he learnt annotation of Sikh Scriptures and young Sant Kahan Singh Ji blossomed into a great scholar. In 1963, he started to perform Katha of the poetic composition of Kavi Bhai Santokh Singh Ji's Gurpartap Suraj Granth.

He was baptized with the Amrit of the double edged sword(Khande Ki Pahul)) at Goniana Mandi and was brought in the fold of Khalsa in the year 1965 A.D. and from that day onward he has inspired thousands of people to get baptized with the Amrit of the double edged sword and to enter into the Khalsa brotherhood. He has spent most of his life bringing wayward Sikhs back into the brotherhood of the Khalsa. This kind of missionary work for the Panth has been the center of Bhai Kahan Singh Ji’s life for almost 32 years. Every year during the 3 week period from March 14th to April 5th, during the Gurmat Samagam celebrating the anniversary of Mahant Bhai Gulab Singh Ji, the founder of the Tikana Sahib at Goniana, Bhai Kahan Singh Ji travels to dozens of villages encouraging people to partake of the Khande Ki Pahul and advising them of the necessity of ‘obeying the Command of Guru Gobind Singh Ji’. Every year during the Yag Samagams in the months of January and April, at the Tikana Sahib, Bhai Kahan Singh Ji arranges for a special Amrit Sanchar ceremony for all interested Sikhs living in Goniana and the neighbouring towns.

Once he had a fortunate chance to accompany Sant Bhai Nischal Singh as a pilgrim on a pilgrimage train arranged by Sant Ji for visiting historical Gurdwaras and other Holy places. He enjoyed that journey greatly and also acquired the wonderful experience of serving devotees, by arranging such pilgrimage trains. He then arranged several such journeys in the service of humanity.

Later in 1966 itself, Bhai Kahan Singh Ji got an opportunity to teach young children at Bhai Jagta Ji Model School. From 1973 to 1991 Bhai Kahan Singh Ji taught Gurbani, Sikh History and other religious studies to students of Mahant Asa Singh Girls College, including training them to correctly recite and memorize many Banis.

His Mission as a Mahant

Most of his life, before being anointed as the Mahant of Tikana Bhai Jagta Ji Sahib, Bhai Kahan Singh Ji, as in-charge of the Gurmat Vidayala, spent many hours daily, teaching Gurbani recitation, Gurbani exegesis and Gurmat Sangeet to hundreds upon hundreds of young Sikhs who visited or stayed at the Tikana Sahib at Goniana. There are dozens of Raagis, Katha Vachaks and orators who fondly remember, his kind and gentle way of teaching and his humility, even today. Bhai Kahan Singh Ji has a great appreciation for people who are proficient in Sikh literature and religious studies and enjoys spending time in their company. He himself has memorized several dozen Banis. He is very diligent in holding annual competitions on the subject of divinity, encouraging students with generous prizes and scholarships.

He has been a freelance contributing writer for several Punjabi language newspapers in India. He has himself authored many books, the most famous of which are, his exegesis of Baaran Maha, Rehras Sahib, Kirtan Sohila and Anand Sahib. He has many Gurbani Katha CDs abd DVDs in the market today. His most favorite topic is Guru Granth Sahib Mahima and he has released Audio and Video CDs on the subject, besides releasing a booklet on the same subject. He has been most instrumental in the success of the Seva Panthi monthly magazine, ‘Sewa Jyoti’. Every monthly edition of ‘Sewa Jyoti’ has several articles of Gurbani exegesis by him. This magazine is sent free every month to almost 14000 homes worldwide. He has completed the exegesis of the ‘Bavan Akhri’ bani and is now preparing an exegesis for Sukhmani Sahib, a portion of which is published in the monthly magazine, ‘Sewa Jyoti’.

Mahant Sahib has been honored by several Sikh Panthic organisations in India and in Western Countries for his many contributions to the Panth. He was also the convener of four separate All India Sikh Educational Conferences. One of these conferences was held at Goniana Mandi. In one of the conferences held at Malout, he was appointed as the Chairman of the Welcoming Committee. In 2008, during the 300th anniversary celebrations of the Guru Granth Sahib Ji’s Gur-Gaddi divas, Mahant Baba Kahan Singh Ji and his entourage from Goniana Mandi spent several weeks at Sachkhand Sri Hazur Sahib in Nanded, serving Langar to Sikh Sangats. His efforts were greatly appreciated by the entire Sikh Panth and other Holy men for his efforts. Mahant Sahib has over the years arranged many huge pilgrimage tours by chartering 'whole trains' for devotees, arranging to visit historical Sikh Gurdwaras and Takhats etc.

Mahant Kahan Singh Ji is a great missionary of the Sikh faith and a true jewel of the Sikh Panth. He has made several extensive trips to North America and England to spread Guru Nanak Dev Ji’s message. Even when he travels to the United Kingdom, the United States or Canada, he only preaches the greatness of the Guru Granth Sahib. People everywhere faithfully gather around him to learn Gurbani and Sikh History. He has an ardent desire to teach the tenets of Sikhi and to teach Gurbani to young children. He is very particular about the development of the new generation into devout Sikhs. Every home that he graces, he immediately asks the young children of the household to come to him with their Gutkas and start reciting the Nitnem Banis. He has unlimited patience when he is teaching young children Jap Ji Sahib, Rehras Sahib and other Banis.

On January 15th, 2008, Mahant Tirath Singh left his mortal body for a merger with the Supreme and on the morning of that blessed day he most aptly anointed Mahant Baba Kahan Singh Ji to succeed him as the chief assignee of the Tikana Sahib. Mahant Baba Kahan Singh Ji has taken charge of all the institutions and other responsibilities, in addition to his other activities and is fervently making advances in his mission and advancing his most exemplary career. We pray to Almighty God to bless Mahant Sahib with perfect health, a long life and unlimited success in his endeavours.