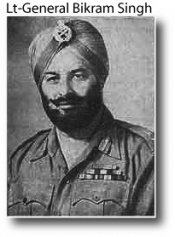 Lt-General Bikram Singh, G O C, XV Corps held in the highest esteem for his record in defending Ladakh and Chushul died when an Alouette (also called the HAL Cheetah) helicopter of the Indian Army crashed on 22 Nov 1963 near Poonch city in the 2.5 Km radius of ceasefire. He is considered the bravest and most efficient General of the Indian Army. Air Vice Marshall Pinto, Lt Gen Daulet Singh, Brigadier S.R. Uberoi (MC) and Maj Gen Nanavati along with the pilot Flt. Lt. Sodhi also died in the crash.

In memory of this Great Sikh General a chowk of Jammu city has been dedicated in his name. Known as Bikram Chowk it is the biggest chowk in Jammu city. A statue has also been erected in the middle of this chowk by the Sikh Sangat of Jammu.

Every year Akhand path of Guru Granth Sahib ji is performed in this chowk on martyr's day by the Sikh Sangat. A Gurdwara has been built in his memory in a nearby Sikh Locality of Bikram Chowk.

This photo of Lt-General Bikram Singh is scanned from a Newspaper account at the time of the crash. If you have a better photo please replace the image. Anyone on the Sikhiwiki team would be glad to assist you.