Kimi Verma is a Punjabi born actress and entrepreneur (clothing designer?) who runs her own shop in Los Angeles. Thanks to parents who stressed that she and her brother speak Punjabi in their home she speakes the language well. Most internet sites on her are empty with few details. What is known is that she moved with her family from somewhere in Punjab to the city of Mumbai when she was 10 years old. She won a beauty contest or two and was soon approached for roles in Punjabi films. She left India to study in Boston acording to this and several interviews. She is very proud of being a Punjabi but her village or city is not mentioned.

This is one of the recent interviews which covers all that is currently in the press about her, in which she tells of spilling some of her own blood while scrambling over some rocks during the filming of her most recent film - Sat Sri Akal.

Over half a dozen popular Punjabi films in the last decade are a testimony to the prowess and popularity of Kimi Verma. Currently, Kimi is unquestionably the most established female lead in the Punjabi Cinema. Versatility, good looks and fluency in spoken Punjabi language are some of her major assets. Below, PlanetBollywood.com presents an interview with Kimi Verma.

Can you elaborate upon your acting assignments so far?

I did my first film when I was 14 years old. The film was Nasibo and was directed by none other than the acclaimed director of Punjabi films, Manmohan Singh. I was studying in school when I got a chance to work with him. I never even dreamt of being an actress, but I guess destiny had some nice plans for me. After Nasibo, I did a few more Punjabi films like Qahar, Khoon Da Daaj, Shaheed Udham Singh, Jee Aayan Nu, Asanu Maan Watna Da, Mera Pind My Home, and the latest, Sat Sri Akal. 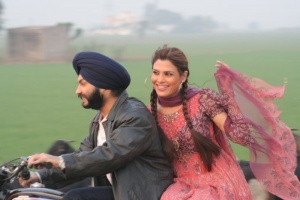 A Scene from Sat Sri Akal

It is learnt that you chose acting as a career after you were crowned as beauty queen?

Not exactly! My family moved to Bombay just after my 10th grade. Straight from Punjab, I ended up winning the title of Miss Bombay in 1993 and Femina Miss India Beautiful hair 1994. Acting has never been my full time career. I always concentrated on my studies. I did my graduation in Bombay and then moved to Boston to pursue my higher education. Movies have been my hobby and fervor. I have been enjoying to do good projects whenever I get time.

Did you ever get any special training for the same?

I have never received any special training for acting. I did a lot of modeling in India, U.K, Egypt and Sri Lanka for brands like Sunsilk, HSBC, Clinic Plus, Liberty, Nescafe, etc. I was also a spokeswoman for Ponds Institute and Skin Care for India and Egypt. That gave me lot of exposure and credence. Further, thanks to my family that my command over Punjabi language is extremely good. Despite living away from Punjab for most of my life, my parents insisted me and brother talk in Punjabi at home as much as possible. They were verily aware that as kids we will pick up English and Hindi easily but we will tend to forget Punjabi. I am glad that they asked us to do that when during our formative years. I am proud to say I can read and write Punjabi very well. I even won an award for Punjabi handwriting competition when I was a student!

Did you any time move to Bollywood to act in Hindi movies?

Somehow this is quite a widespread misgiving. I never made any move to act in Hindi films. In fact, I never believed in any kind of rat or cat race to join Bollywood. Despite being offered some key roles, I showed little interest then as I was busy concentrating on my studies.

Today, you are indisputably the most popular female lead in Punjabi cinema. If not an actress, what else would you have been?

I told you earlier, acting is not my bread and butter. Hence, it is my passion but not a profession. Had acting been not there in my life, I would've been involved in some kind of creative activity like painting, direction, writing or even journalism. Regarding most established actress in Punjabi cinema, I neither endorse nor refute. Simply I have tried to put in my best in every venture that came forward.

Despite running an established business in LA, USA, what prompts you still to do films, that too only in Punjab?

I am a Punjabi girl and I feel proud to be a Punjabi. I was born in Punjab. Punjabi is my mother tongue. That's why I had been doing only Punjabi projects. I feel it is my duty as an individual to do something concrete for my native place and language. I feel honored to be a part of films that made Punjabi film industry revive. And I am even more proud to be a part of Punjabi films that always conveyed a beautiful message to audience besides entertaining them. But of course besides Punjabi, I've acted in a popular TV serial (English), "Switch reloaded", and anchored a TV serial Meri Saheli for Star Plus a few years ago.

How did you choose Sat Sri Akal as the movie project?

The movie Sat Sri Akal was offered to me last year. I had a few telephonic conversations with Dr. Bhupinder Singh Bhoop Ji about this project about a year back. I was very enthused on hearing the impressive narrative from him encompassing everything which people "want to see" and "ought to see". I liked the way story progresses and ends leaving a "carry home" message to people around the world about love and faith.

What fascinated you most in the Sat Sri Akal movie project?

The project had everything goodie goodie about it. Storyline was a big allurement and my proposed vital role in it. The crew members chosen for this film were amongst the best in the industry like Mr. Arun Bali ji, Dolly Minhas Ji, Nirmal Rishi ji, Avtar Gill ji, Vivek Shauq, cameraman Inderjit Bansel, besides our director, Kamal Sahni. Music was certainly very touching with compositions rendered by top voices of the world like Jagjit Singh, Alka Yagnik, Kavita Krishnamurthy, Sadhna Sargam, Abhijeet, Sunidhi Chauhan and the like. Late Ishmeet gave his only playback in Sat Sri Akal.

But what fascinated me the most was the objectives of its producers. When I heard about the intent of this venture is to raise funds for the hospital projects that Mata Tripta Ji (C) Trust runs, I was moved. I am a part of few charities around the world, so it was really touching to know that the whole team of SSA is involved in making this project a success to support all the gracious work that MTJC Trust does. All the members of the trust worked relentlessly and tirelessly to accomplish this project endeavor.

Their association with Franfinn Entertainment has added another beautiful, feather in the cap of Sat Sri Akal.

How did you find working against Manpreet Singh?

Most Punjabi films have witnessed singers in their male lead. Accordingly, I had somewhat skepticism earlier about his credibility and credential both. But all my apprehensions were found to be unfounded. Manpreet is indeed very talented with a lot of potential, zeal and appeal. His looks are a big plus point and Punjabi film industry definitely needs a real Punjabi hero. I feel he will receive a heartwarming welcome from audience of all ages. He was very cooperative, always yearning to learn every moment. We had good understanding and chemistry between us on the sets of Sat Sri Akal. Although Sat Sri Akal is his maiden Punjabi film, he seems to have a bright future awaiting him...

All the members of the Trust had such a great sense of optimism whenever anything untoward happened like our generators failed or lights did not work. Especially Arvinderjit Singh (Kittu Veerji), who happens to be Chief of Trust and writer of Sat Sri Akal movie as well, was always so tranquil and stoical in the times of extreme stress also. During making of this film, I definitely learnt to be calm and composed even when life does not go exactly how we plan it.

Another interesting incident is when we were shooting for the song "Ik Mik Ho Gaye" around the Shimla hills, I ended up hurting my hand while moving around the stones and started bleeding. Although it happened by chance, yet I consider it auspicious as I have always had an injury where my hand or my foot bleeds while shooting for most of my films. And by God's grace, all of those my movies have been pretty successful. Therefore, it is not just my sweat but my blood also becomes a part of Sat Sri Akal film. I feel God always planned it that way, and I am very happy about it.

Finally, what message would you like to pass on the viewers/readers...

I feel I am not that old to sermonize. But I would certainly like to put across a few lines to my folks and fans. Give utmost respect your parents, say no to drugs, teach Punjabi to your kids and currently, go and watch Sat Sri Akal! Take your family along with. I guarantee you all will not only enjoy this family entertainer, but also you would be richer in values, love and faith.