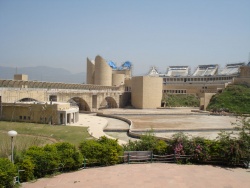 In 1499, Guru Nanak Dev founded a unique religious faith rooted in the core values of universalism, liberalism, humanism and pluralism. The nine Gurus after him consolidated his teachings, further articulating the faith, thereby establishing Sikhism as a way of life.

Two hundred years later at Anandpur Sahib, on the occasion of Baisakhi, the Tenth Master, Guru Gobind Singh formally instituted the Khalsa Panth of saint-soldiers, an egalitarian and distinctive social order, committed to peace, equality and justice for all. Today, on the site of this epoch-making event stands the majestic Gurdwara Takht Sri Keshgarh Sahib.

April 1999 marked the Tercentenary year of the Birth of the Khalsa, an event celebrated all over the world. To commemorate this event, the Government of Punjab envisioned the Khalsa Heritage Complex at Anandpur Sahib as an inspiring tribute to the heroic and poignant saga of the Sikhs and the Punjab.

Being built on a 100-acre site, the Complex has presently been conceived as two functionally integrated sets of buildings. The Western complex forms the gateway for the town. It houses functions that respond directly to the needs of the people — changing exhibit galleries; a two-level research and reference library centred around a great reading room open to vistas of water gardens to house rare archival materials, books, journals as well as audio visual resources; and a 400-seat auditorium to host seminars and cultural events.

A 165-metre bridge from the Western complex provides pedestrian access to the Eastern complex, the Khalsa Heritage Museum, that comprises permanent exhibit galleries on 500 years of Sikh heritage along with museum facilities to rival any world-class museum. A series of reflecting pools create a seven-acre water body between the two complexes. Arcaded walkways and gardens on either side gently cascade towards the serene pools. Public facilities and a cafeteria are located at the base of the bridge overlooking this vista. The finest craftsmanship is being deployed to create a Complex worthy of Sikh aspirations and traditions. In the future new facilities may be added to make the Khalsa Heritage Complex the world’s foremost, comprehensive Sikh heritage centre

Popularly known as the ‘Ajooba’, the Khalsa Heritage Museum, the first of its scale in the world, is a storytelling Museum covering 6500 square metres of fully air-conditioned space. The story to be told within the Museum’s monumental architectural spaces is deeply spiritual, passionate and emotional. The exhibition design therefore strives to convey this spirit by the creation of a variety of immersive environments that transport visitors into a different time and space, thereby enhancing their capacity to receive the intended communication. A multi-layered communication strategy ensures that visitor aspirations are met, in a language and level of detail of their choice. The visitor to the Khalsa Heritage Museum will not only leave better informed but will also be emotionally moved. Cutting edge communication technologies juxtaposed with original artefacts have been seamlessly integrated with the vernacular aesthetic to highlight a robust, living culture. The Museum caters to a wide audience — Sikhs from rural, semi-urban and urban milieu; non-resident Sikhs; the devout and the sceptic; other Punjabis and tourists; the non-literate, the scholar, the aesthete; children, teenagers, the aged. Each one would find something in this Museum that interests, informs or touches them, irrespective of who they are, from where they come and whatever may be their faiths.

The Museum as conceived by AB Design Habit with a state-of-the art multi-sensorial experience based on the metaphor of centring — the land of Punjab, the watan that sustains its people, draws the non-resident Sikh homewards in pilgrimage. The show locates its people in their innermost selves, in the home, in the countryside, in the global work place, in their sacred spaces, in an attitude of kirt, Naam and wand chhakhna.

Then the visitor is introduced to 15th Century Punjab, the milieu in which Guru Nanak was born, leading up to the spirit of his Revelation, encapsulated in a luminescent installation evoking the concept of Ek Omkar, the space gently echoing to the sound of the Mool Mantra.

The Museum culminates within a serene space encouraging the visitor to quietly reflect on their experiences. The same luminescent installation seen earlier continues from above to plunge into the depths, thereby conceptually connecting the beginning to the end. This summation space resonates with the message of universal good for humanity embodied in the last lines of the Ardaas — “Nanak Naam chardi kala, tere bhane sarbat da bhala”, reiterating the contemporary global significance of the Gurus’ teachings.

The first level of the Museum galleries with their lofty sweeping roofs is devoted to the lives and teachings of the Gurus. A highlight are the galleries that describe significant events leading to the Birth of the Khalsa, conceived as a visual narrative and special effects show to dramatise the event. Shadow play of larger than life imagery with battlefield sounds captures Khalsa valour and the heart-rending saga of the martyrdom of the Sahibzadas.

A flower-like tensile structure in shimmering gold and silver glows from within to embody the spirit of Guruship, manifest in the Guru Granth Sahib & Guru Panth. The lower level galleries chronicle Khalsa trials, tribulations and triumphs from Banda Bahadur up to the immediate aftermath of Partition, when Sikh dynamism transformed the Punjab with its élan, energy and resilience.

Khalsa Heritage Complex has been conceived to project the history, culture and Restage of Sikhs on an international scale. Situated in the foothills of Shivalik range of Himalayas, Anandpur Sahib is 80 kms by good motorable road from Chandigarh, the capital of Punjab. The last stretch of 11kms has been four-laned. There are two decorative entry gates on the main road with a beautifully developed park to greet the visitors to the town. By train, it is an overnight journey from Delhi. The rail link from Chandigarh to Morinda is Completed to facilitate a train journey from Chandigarh to Anandpur Sahib.

Khalsa Heritage Complex has a great potential for tourists as the town already attracts a large number of pilgrims, to Sikh Gurdwaras and the temple of Sri Naina Devi besides a good number of foreign tourists. An average of 5,000 pilgrims visit various Gurudwaras at Anandpur Sahib and Kiratpur Sahib on weekdays and about 13,000 pilgrims visit during weekends and holidays. Anandpur Sahib is halting place for climb to the temple of Sri Naina Devi atop the range – which is shortly going to have a ropeway trolley from Anandpur Sahib upto the temple. At present, about 1,000 pilgrims visit Sri Naina Devi daily. Anandpur Sahib is on way to Dera Vadbhag Singh and legandry temple of Baba Deot Sidh. About 1000 visitors throng to these two pilgrimage centres daily. The town is also enroute to Dharamshala – the headquarters of Dalai Lama. National Highway from Chandigarh to Kulu and Manali tapers off from Kiratpur Sahib which is just 10 kms away. The place is very close to world famous Bhakra Dam which is also visited by people from all walks of life.

Traditionally known as the area for medicinal herbs, 320 herbs have been identified around Anandpur Sahib. A Nature Reserve Park of 289 acres has been set up for phased development. Dedication and Meditation Centre is another major attraction of the town. Besides, Dashmesh Academy provides lush grounds for horse riding, tennis, football, hockey; ranges for archery and shooting; and a multipurpose hall for Martial sports.

What may be seen today on the site of the Khalsa Heritage Complex is the bare structure of this vision — an edifice under construction. Once complete this Museum will probably be the world’s largest cultural and historical museum dedicated to a single community.

The total construction cost of this project, including exhibits, is estimated at Rs. 224 Crores (US $56.00 millions). To date approximately Rs. 132.50 Crores (US $33.15 millions) have been spent on the project. An additional amount of Rs. 140 Crores (US $35 millions) will be required initially as a corpus fund for operations and maintenance.

The Khalsa Heritage Museum is scheduled for public opening by April,2009 for Ist Phase to coincide with the 400th year of the installation of Guru Granth Sahib in the Golden Temple at Amrtisar and the 300th year of the martyrdom of all the four Sahibzadas of Guru Gobind Singh.