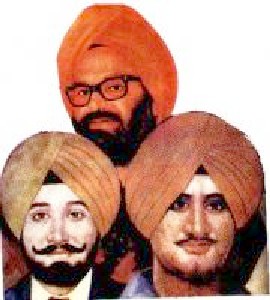 Kehar Singh ਕਿਹਰ ਸਿੰਘ known as (Phuffer ji) was tried and executed for conspiracy in the plot to assassinate Indira Gandhi, carried out by his nephew Beant Singh and Satwant Singh both part of the elite bodygaurds of Indira Gandhi.[1] Known for his knowledge of Sikh philosophy and history his nephew had asked Phuffer ji, will Waheguru send a Sukha Singh and Mehtab Singh (famed Sikhs who had killed Massa Rangarh for his attacks on Amritsar and the Harmandir Saheb) to avenge this sin of desecration of Siri Darbar Sahib?" While he handed his uncle a book on the now Sant Jarnail Singh Bhindranwale.

His uncle replied, "Do not greive, if you have love of Sikhi, then learn that giving your head, and taking a head for Sikhi are equal. After all, someone has to be the son of Sukha Singh and Mehtab Singh. They took Khande ki Pahul Amrit from Sahib Siri Guru Gobind Singh, went and took the head of Massa Rangar to stop the desecration of Siri Darbar Sahib and thus became legends in Sikh History. We need to remember them, and become like them."

These words from his uncle were like a spear in his heart. After the assasination of Indira Ghandhi, despite Beant Singh's confession that only he and Satwant Singh were responsible for the death of the Prime Minister, Kehar Singh was charged as well.

Operation Bluestar, on the Shaheedipurab of Guru Arjan Dev

The assassination was motivated by Operation Blue Star (which was carried out on the very day of the 'Shaheedipurab' of Guru Arjan Dev) the military action against the Sikh "Golden Temple" in Amritsar. During the operation there was significant damage to the temple which caused the death of hundreds of innocent civilians including women and children. These violent events which led to the desecration of the sikh holy shrine Golden Temple / Harminder Sahib caused outrage amongst the Sikh community, which claimed that the attacks were pre-planned and that the anti-Sikh violence which followed was government orchestrated.

Beant Singh and Satwant Singh were Sikh bodyguards of Indira Gandhi, and on 31 October 1984 they assassinated her in her garden, putting sixteen bullets into her chest and abdomen.

The Day of the Execution

On the 6th of January 1989, at 4am - the time the Sikhs call Amrit Vela, the authorities walked Kehar Singh and Satwant Singh towards their nooses, their voices could be heard from outside the jail, shouting, "Jo Bole So Nihal ! Sat Siri Akaal (God is truth - he who says this will be saved!)" Then after a few moments silence, as both of them stepped forward and kissed the hangmans noose, a very heavy rainfall started to fall.

Just as the British had done with Bhagat Singh, Sukhdev and Rajguru. Their bodies were taken to Ferozpur, and cremated on the banks of the Sutluj river. Similarly, the Indian Government did not hand over the bodies of Shaheed Satwant Singh and Shaheed Kehar Singh to their next of kin. Their bodies were cremated within Tihar jail.

The last wish of both Shaheed Satwant Singh and Shaheed Kehar Singh was that their ashes be taken to Siri Kartarpur Sahib. Citing concerns about possible violence, the autorities refused to turn even the ashes over to the relatives for use in religious ceremonies. The Police forced the families of the two Shaheeds into jeeps and vans and drove them to Hardwar. Throughout the whole journey to Hardwar, it rained heavily.

Then at gunpoint, giving the families no choice, the final ardas for the Shaheeds was done. Just as the ardas began, the rain stopped. It was like nature was also paying respect to the Shaheeds. Bhai Satwant Singh`s father, Bapu Tarlok Singh, and the son of Bhai Kehar Singh, Sardar Rajinder Singh, poured the ashes in to the river at Hardwar.

Many people felt that the 54 year old Kehar Singh was innocent and falsely acused. During the execution as crowds protested, jostling with policemen there was no violence. At one point Kehar Singh's sons grabbed and muffled the mouths of those shouting slogans, urging restraint.