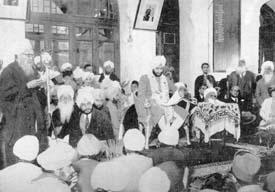 Bhai Jodh Singh is a legend of our time. Bhai Jodh Singh took over as Principal of Khalsa College Amritsar in 1936. He will always be remembered for his professional commitment.He retired as Principal of Khalsa College, Amritsar, at the age of 70. He became the founding President of the Punjabi Sahit Akademi, Ludhiana, at 72 and created a record by becoming the first Vice-Chancellor of Punjabi University at 80. Even at 100, he had an enviably alert mind and a sharp brain. Only his body gave way to death.

Persons, who pray regularly, concentrate on the Naam, donate one tenth of their income for a good cause, reach very high status in their professions and have a long life. Principal Bhai Jodh Singh was a great Sikh scholar. From his very childhood he used to regularly recite the daily prayers and later regularly donated one tenth of his income to the charities.

He lived for ninety-nine years, six months and four days. According to Vedas you can hope to live for a hundred years if you continue to do honest deeds. The philosopher Carlyle says, ' Man does not die he kills himself.' Sinful propensity, envy, fraud, enmity, anger and many such bad acts and habits reduce the life of a person.

As the time was passing I became anxious about Principal Sahib' s health. His passing away was a real eye opener for many of us. He did not suffer from any disease and passed away peacefully because of old age. Two or three days before his death he had stopped eating. The night he passed away, a doctor and his son S. Sunder Singh were with him till midnight.

Principal Sahib used to get up at two'o' clock in the morning. On this night also his son Sunder Singh came to his bed at two' o' clock. He could see his father' s lips moving. He asked his father whether he was reciting 'Sukhmani Sahib' to which he replied in negative by moving his head. He asked his father once again if he was reciting ' Japji Sahib' to which he replied in affirmative. Then he signaled to him to switch on the tape recorder on which a cassette of Sukhmani Sahib was loaded. Principal Sahib passed away while listening to 'Sukhmani Sahib' . How did he live a very fruitful life of 99 years, 6 months and 4 days? The answer to this question is given in the following paragraphs.

He used to get up early in the morning and recite the daily prayers of the Sikhs. His mind was always engrossed in His Name. He did a thorough study of Gurbani and wrote many religious books and also revised the English translation of Guru Granth Sahib. For this purpose Professor Gurbachan Singh Talib often used to come to him. About a month before his death, when Talib Sahib came to see Principal Jodh singh, he found him to be suffering from slight temperature. Talib Sahib wanted to leave and return at a later date but Principal Jodh Singh said that he will continue the work while lying down and requested Professor Talib to read out aloud, with that he continued with the revision. These were the very reasons for which God had granted them a very long and rich life.

While he was the Principal of Khalsa College, he was paid a monthly salary of Rs. 1200. But when he retired from Khalsa College and became the Vice Chancellor of Punjabi University, his salary was fixed at Rs. 2200. At that time he asked his son S. Sunder Singh that his requirement was only Rs. 1000 and one thousand two hundred rupees were beyond his requirement. He wanted to donate Rs. 1200 every month. As his son was his only heir, Principal Jodh singh asked him whether he had any objection to his decision. His son replied that he had received such high education and was then a Deputy Commissioner so he could live very comfortably with what he earned. He urged his father to use the extra money as he pleased. After this Principal Sahib used to take only Rs. 1000 for his expenditure the remaining Rs. 1200 were distributed between the poor students. He had established a small committee for selecting the deserving students for this purpose. In this manner he donated about Rs. 36,000 in a period of three years.

Shortly before this, he had taken a full account of his income and taken out seven thousand rupees as his dues towards ' Daswandh' . He gave this money to his son and asked him to donate it to a suitable charity organisation, His son carried out his wishes.

Principal Sahib had started reciting Gurbani from his very childhood. I asked him from where did he get the inspiration. He told me that when he was a small child his grandfather (Nanaji) used to take him in his lap while saying his daily prayers. Watching his grandfather he also started reciting Gurbani. He told me that during his adolescent years he had stopped saying his prayers thinking that he was not able to concentrate on the prayers and it was no use to carry out the ritual. Having stopped his prayers he found himself becoming extremely short tempered. Scared of his temper, he resumed his prayers.

Principal Sahib led an exemplary life. Whenever I remember him I bow my head in reverence to him. A man can progress only if he maintains a code of conduct. I have come across only four people in my life who have been an outstanding example in maintaining discipline and austerities. They are Principal Jodh Singh, Akali Kaur Singh, S. Dhanna Singh, Commissioner Patiala, and Doctor Puran Singh Faridkot. Although Principal Jodh Singh never joined the defense forces, all his actions were carried out with military precision; even his walk was of a military style. He was a military man in his walk, speech and behaviour. Whenever he used to reach the college, professors and the students used to synchronise their watches on his arrival. He used to have his lunch at 12 'o' clock. At that time he used to stop all his work for his lunch break and if for some reason he missed the appointed time he used to go without lunch.

Principal Sahib had two sons. One of them died in the prime of his life while pursuing his studies. Principal Sahib himself said the last prayer for his son. Next day the students thought that Principal Sahib will not come to the college but to their surprise he took their class as usual. He was like the English professor who received a telegram while he was teaching his class. The telegram stated that his son had died. After reading the telegram he put it in his pocket and resumed teaching the class till the period was over.

Principal Sahib commanded a very dominating personality. Anyone talking to him was acutely made aware of saying something worthwhile. He was always busy in studying and writing and wrote many books on the Sikh religion in English as well as in Punjabi. His book on the Sikh religion 'Gurmat Nirnain' is very famous. He was also a member of the Punjab University Senate and his opinion carried the maximum weight. He did remarkable work in the university for the prosperity of the Punjab State. He was very keen that Punjabi language should not be distorted and maximum number of people should learn the language and its correct usage.