Jean Baptiste Ventura (born 1794 - died 1858), a general in the Sikh army, was an Italian born in Finale Emilia. Born to Jewish parents he served in Napoleon's army as a colonel of infantry and had taken part in the battle of Wagram (1809), in the Russian campaign (1812) and in the battle of Waterloo (1815). 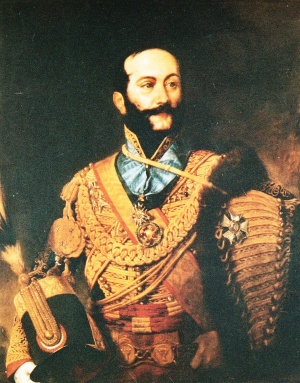 After the defeat of Napoleon, he left France and wandering through Persia and Afghanistan, reached Lahore in 1822 in company with Jean Francis Allard, whom he had met in Teheran. Ventura was given employment by Maharaja Ranjit Singh and enstrusted with the task of organizing Sikh infantry on European lines.

He raised four battalions of FaujiKhas, a mixed model brigade comprising over 3,000 men of regular infantry, a regiment each of grenadiers and dragoons and an artillery corps of 30 guns. It was partly trained on the British model and partly on the French, having its own flag with an emblem of eagle with Guru Gobihd Singh's sayings embroidered on it. Ventura introduced the mess system in his command. He also designed a uniform for the Gurkhas in the Lahore army which style was later adopted by the British for their Gurkha troops.

In 1825, Ventura was engaged to carry out the strategic planning of the Maharaja's expeditions. He took part in several important campaigns, including the battles of Naushehra (1823) and Peshawar (1823). He also took part in the campaign launched against the Wahabi fanatic, Sayyid Ahmad Barelavi, in 1831. Another of the duties he was assigned to by the Maharaja was the taming of the turbulent frontier districts. In 1832, he was entrusted with the administration of the Derajat. According to Baron Charles Hugel, who visited Punjab in 1835, Ventura during 1835-37 served as the Qadi (chief judge) of Lahore. Ventura was also often given the honour of receiving dignitaries, especially Europeans, visiting the Sikh court. In December 1836, he was promoted to the rank of general, followed a few days later by the grant of the title of Faithful and Devoted. He was given the title of Count de Mandi after the campaign in the hills of 1841 and in France he was generally known by that title.

Ventura drew a salary of Rs 3,000 per month. He lived in style in a magnificenty built residence near Anarkali's tomb in Lahore. He married an Armenian lady at Ludhiana who bore him a daughter. After the death of Maharaja Ranjit Singh, he continued in the Sikh service, supporting Sher Singh against the Dogra faction.

After Maharaja Sher Singh's assassination in September 1843, he left the Punjab and returned to France where he died on 3 April 1858 in Lardenne near Toulouse.