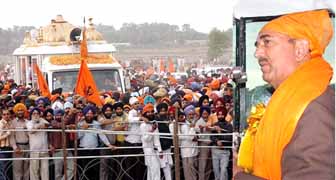 Chief Minister Ghulam Nabi Azad has said that Guru Granth Sahib has taught us brotherhood and amity and the grand ‘Guru Manyo Granth Jagriti Yatra’ would promote community harmony in the Jammu and Kashmir.

While according grand reception to the holy ‘Jagriti Yatra’ at the gateway of J&K State at Lakhanpur in district Kathua this afternoon along with thousands of people, Mr Azad said that coming Yatra would promote communal harmony and brotherhood in the State. He said people from different religious faiths, caste and creed have assembled at Lakhanpur and other towns enroute Jammu to accord grand reception to the Yatra carrying holy Guru Granth Sahib and the weapons of great Sikh Guru Gobind Singh ji. The Chief Minister said he was receiving the yatra on behalf of people of the State. He said the State has been an abode of communal harmony and the warm reception given to the Yatra here by people from all walks of life has been an expression to this fact. He hoped that ensuing yatra would promote brotherhood and amity in the State. Mr Azad said the State Government would take care of this historic yatra and try its best to provide smooth and comfortable stay of those accompanying it.

The Sikh spiritual personality, Mahant Manjit Singh of Dera Nangali Sahib had gone to Lakhanpur along with a large number of Sikh Sangat to receive Yatra and accord it rousing reception. The yatra after taking halt for about one and half hour at Lakhanpur started for Kalibari and Rajbagh where people welcomed it in large number.

It crossed Kalibari at around 6.45 pm and proceded to Jammu The yatra, organised in connection with 300th anniversary celebrations of Guru Granth Sahib, had started from Nanded in Maharashtra and after covering various States would culminate at the same place. A huge gathering of people from the State accorded grand reception to the ‘Guru Manyo Granth Jagriti Yatra’ which entered the State at Lakhanpur at around 3.30 pm. The yatra was scheduled to arrive at Lakhanpur at around 10 am but it was late enroute Jammu. The State administration had made elaborate security arrangements. About 20 additional companies of police and para-military forces had been deployed for security cover and to ensure smooth passage of yatra.