Salman Khan, playing a Sikh in Samir Karnik’s 'Heroes' , refrained from smoking whenever he was on the set wearing a turban. When his co-stars and director tried to find out the reason, Salman told them, "Sikhs consider smoking unsociable and dirty." Out of respect for the Sikh community, Khan who is said to be a chain smoker, never lit a smoke while he spent as many as 10 hours a day in his Sikh garb, according to the film's producer Vikas Kapoor. 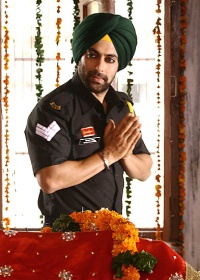 Salman Khan in role as Sikh in 'Heroes' 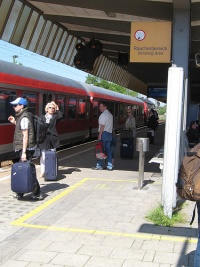 Like the Accused in the Dock, German Smoking area

But the reason that Sikhs have nothing to do with tobacco is much deeper than it being a dirty and unsociable habit. For Sikhs any use of is tobacco is actually banned, as tobacco is listed in the Sikh Rehit Maryada (Sikh Code of Conduct ) as one of the four major Kurahits (transgressions), for which a Sikh who has taken the vows of the Khalsa may become patit or tankhahta (one liable to a penalty). For more than three hundred years Sikhs have taken to heart the words of their Tenth Master Guru Gobind Singh, who once, having spotted a wild tobacco plant, dismounted his horse and grabbed the plant pulling it out roots and all. Astonished why their Guru would do such a thing, the Sikhs asked why he had stopped to do this. The Guru replied, that while alcohol was avoided because it destroyed a generation, tabacco's use could destroy several generations. The Guru then forbade his Sikhs to ever use tobacco.

It's not as if the Guru had never seen a tobacco plant or anyone smoking tobacco, for by his time tobacco use had become common among the the Mughals. We can be fairly sure that its dangers which are now well documented were fairly unknown at the time, but Guru Gobind Singh for whatever reason was way ahead of the World, which has taken hundreds of years to discover the dangers associated with smoking, chewing or sniffing tobacco.

Today India banned smoking in public places, leaving public health officials with the task of getting the nation's estimated 120 million smokers to drop the habit which can be just as addicting as afim (heroine). While other countries around the world have clamped down on smoking in recent years, Indians have puffed away at playgrounds, railway stations, cafes, hospitals and even in movies, but now a violator will be given a $5 fine. Officials have plans to raise the penalty to $25 in the future.

In the West smoking has been banned on airplanes for some twenty years and today a pack of cigarettes costs almost five dollars with ever higher taxes being added to help pay the medical costs. Smoking bans have taken Europe and the U.S. by storm in recent years, with most European countries, and several American cities, prohibiting or severely limiting smoking in a host of public places, including bars, restaurants and cafes. Even businesses, realizing the costs to their medical insurance programs, have made their plants 'smoke free'. Employees now often have to walk to sidewalks off their company's property (even clock out) to get their nicotine fix. In Germany train passengers who smoke must stand in a 10ft. painted square like an accused criminal standing in the Dock. Stepping outside the painted box while still smoking draws a stiff fine. (See photo, at right.) 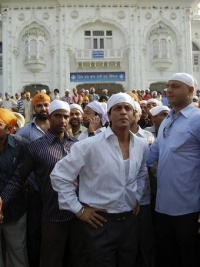 In India where cigarettes are even sold by the piece, to people too poor to afford a whole pack, tobacco companies have been fighting the government to keep health warnings off packs. Officials hope an extensive anti-smoking campaign and tighter enforcement will make this ban more successful than those of the past, but the country's health minister, Anubamani Ramadoss, knows that getting people to quit won't happen overnight. "This is going to be a continuous process," he said. Ramadoss, even criticized India's top Bollywood stars, including Shah Rukh Khan, about their continued smoking on screen, saying that many children have their first cigarettes after watching the actors do it.

On Thursday, Shahrukh Khan, who had visited the Harmandir Sahib last month, when asked about the ban sounded amused. "A better step would be to ban cigarettes, make them illegal and hang anyone found smoking," Khan told the CNN-IBN television news channel. He did not say whether he was planning to give up smoking.

A recent study published in the New England Journal of Medicine said India is in the grip of a smoking epidemic that is likely to cause nearly 1 million deaths a year by 2010. More than half of these deaths would be among poor and illiterate people, the study said. It estimated that there are 120 million smokers in India.

Today Sikhs can marvel at the foresight of Guru Gobind Singh who, by instructing his Sikhs to not just keep tobacco at arms length but abstain from any use of it, has saved generations upon generations from its curse.