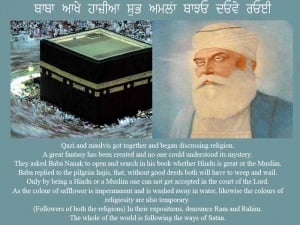 Guru Nanak went to Mecca during his fourth religious travel, known as Fourth Udasi. Bhai Mardana, a disciple from Muslim faith, accompanied him. He put on Ihram, dress worn by hajjis or Muhammadens who went on pilgrimage in those times, with him he took a Faqirs staff in his hand a collection of his hymns under his arm, with a jug(lota) for ablutions, thus he was in the guise of a hajji.

This is considered as last and longest Udasi to headquarters of Islam, among previous three in which he traveled to headquarters and famous religious places in South India, East India and North India discussing and spreading path of Almighty.

Following are evidences from Historical documents(Sikhs and Non Sikhs) which supports his travel to Mecca:

Siyahto Baba Nanak Shah Faqir (ਸਯਾਹਤੋ ਬਾਬਾ ਨਾਨਕ ਸ਼ਾਹ ਫਕੀਰ) - By Haaji Taajudin Naqshbandhi, who met Guru Nanak at Iran during hajj. He recorded each moment with Baba Nanak and his travels with him. Taajudin joined Guru Nanak in his journey around Undlas, a town between Erar and Baghdad. While living with Guru Nanak, he kept a diary—the Siyahto Baba Nanak Fakir manuscript—which he submitted to the library in Medina around 1512 AD1. This suggests that Guru Nanak Dev Ji was in the Middle East—in Mecca and Baghdad—for roughly one-and-a-half to two years in and around the years 1511 to 1513 AD.

Khwaja Jain-u-Labdeen, who was present during nanak travels to mecca also recorded the event. Khwaja Jainul Abdin, the author of Tarikhe Arab, wrote the first-person account of Guru Nanak Dev ji’s Arabian journey. In his Arabic book, he writes, “I was with Guru Nanak Dev Ji when Guru Ji met Qazi (an Islamic religious judge) Rukn-ud-din.”

The writer mentioned his meeting with Guru Nanak.. Yet to be updated

"He (Nanak) travelled over the whole of India; visited Persia, Kabul and other parts of Asia, and, it is said, even Mecca. A story is related by both Hindus and Mahomedians in connection with Nanak's visit to Mecca. It is said that, while at Mecca, Nanak was found sleeping with his feet to the Kaaba, before which the Mahomedans prostrate themselves when performing their devotions. The Kazi, Ruku-ud-din, who observed this, angrily remarked: "Infidel, how dare you dishonour God's house by turning your feet towards it!" "Turn them, if you can," replied Nanak, "in a direction where the house of God is not."

"Nanak dressed himself in the manner of a Haji or pilgrim to Mecaa and Medina. He put on blue garments, carried an earthen jug for water, and a small carpet for saying prayers. A thick staff was in his hand. "And when an opportunity offered, he shouted the Muhammadan call to prayer like any orthodox follower of the Arabian prophet." At Mecca, while sleeping his feet moved towards the Ka'ba, the sacred shrine of Islam. The angry Mulla named Jiwan kicked and scolded him for showing disrespect to the house of God. Quietly came the answer:

"Pray, turn my feet in the direction where all-pervading God is not present."

Pauri 33 Discussion with the Qazis


From there one cleric came running and in anger


And in anger said, O Fakir (renunciate) move your feet away from the Holy Kabba’s direction


My feet were moved, there the door of the Kabba turned | That


That cleric having witnessed this miracle and supernatural event, apologised (to Guru Nanak) ||


(that Allah, God’s) Allah’s beneficiated, mercy, grace and with his blessings it occurred."

The Karni Namah and the Raj Namah are two significant chapters of the Sau Sakhi, (One hundred stories) called by some the Sikh book of prophecy. The Raj Namah appears in, The History Of The Sikhs, by J D Cunningham on p. 340. Cunningham came across this document during the mid 19th century. He states that these compositions are of course fabulous (fables) as regards Guru Nanak (and opposed to the writings of Guru Gobind Singh who sought no expansive Kingdom and thought little of earthly riches and palaces.) Written by someone who understood little of the Gurus teachings and would turn Guru Nanak into a fortune teller who could foretell events as if he were God equating him with the likes of Nostradamus. Rome was of no importance as a World power by the time of the Sikh Gurus. A Sikh does of course currently sit in a seat of power in Delhi, but to cast Guru Gobind Singh as a conquerer from East to West similar to the Madhi of the Shias or the Messiah of the Jews, is questionable.

The Karni Namah was said to be revealed to Qazi Rukan Din, Pir Bahaoud Din, Ghous, Kuthab, Saalaar, Hajji, Sheikh and Mushaikh Aulviya, who sat with Guru Nanak at religious discussions. The Raj Namah was told to Kaarun, on Guru Nanak’s return from medina.

While Guru Nanak was in Mecca and Medina, Qazi Rukan Din asked, True King, tell us your prophecy again. Tell us how you will unfold the future?. Your name is Nanak Nirankari and you are from the Nation of the Lord. What are the instructions for the future?

Nanak replied to Rukan Din, listen to the true answer Whosoever reads or listens to this shall be content. All doubts shall be removed.

In the tenth dress shall reside The Lord. I shall fight many battles against Emperor Aurangzeb.

I shall then send a letter of victory (Zafarnamah) to Aurangzeb with my Singh (Bhai Daya Singh).

Upon seeing him, Power shall lessen and he shall forget his devious ways.

Emperor Aurangzeb will be overwhelmed by the sight of Daya Singh and will start to tremble.

The Khalsa been resurrected! Good has not been done by Gobind Singh? I shall leave having given a kingdom; My name being Gobind

There will be a time when the Khalsa shall forget the teachings I have given them. Sikhi will only be left in name. Many Wars shall occur.

I will have to return again to resurrect the Khalsa. They shall reside in the Punjab.

I shall make people from all four corners into one. They will be in Majjha; They will raid Lahore.

They will bring Potohaar to justice; They will take Peshawar.

They will set up a cantonment at Attock and then open the Khyber Pass.

They will establish a kingdom in Kabul and then take Ghazni. After bringing Hazaara to justice they will march on to Kandahar.

After taking Balack and Buckaara, they will conquer Sindh and Baloch.

After gaining victory over these lands they shall govern all the people.

Mecca, Medina and Rome shall tremble. They shall gain victory in battle over south and west India.

The Guru's Army shall sit at the throne of Delhi. Umbrellas of kingship shall sway over their heads. All shall be content.

From East to West all shall be conquered. None shall challenge the Khalsa. All humanity shall become one.

In the kingdom of the True King, Satjug shall be established.

The Khalsa Panth shall rule. The arrows of death shall not touch them.

The Army of the Timeless shall grow and spread like locusts.

All shall wear vestments of blue; no one else shall be seen. Listen Qazi Rukan Din, The Singhs shall rule.

The Unholy Sheikhs shall be destroyed. Pirs and Mureeds shall be no more.

All shall recite the one name of the Lord. Then he shall come himself.

The untrue shall not be able to see his glory. All humanity shall unite and he will distribute provinces.

Fruits of many kinds there shall be, upon the sight of the timeless. All shall recite VAHEGURU and achieve salvation.

Many Dharamsalas (places of discussion) shall exist. The Koran and the Mosques shall vanish.

The Lord shall manifest himself in body (as man).

He will make all utter VAHEGURU. All Singhs shall flock under his banner.

All shall know him as the True One. He will sit at the throne of Delhi.

He will establish a kingdom of peace and no enemies will remain.

Wherever the Khalsa turns his eye, the 14 realms shall tremble.

For 14,000 years, this kingdom shall remain. Wealth will be collected and food shall be distributed.

The naked and the starving shall all receive; no one will go without.

Sayeth Nanak, Rukan Din, This is how it shall be. Whosoever reads the Karni Namah, his love with The Lord shall grow.

The Word of the Timeless shall prevail. Those uttering falsehood shall not remain.

After the effect of The Akaal, forests, mountains and the world shall see salvation.

The Khalsa shall Rule. There will be no-one left to oppose them. All who are lost shall gain the safety of the Khalsa

The lord of Mecca and Medina, Kaarun, he made his disciple. When Nanak was about to depart,

Now thou art about to go, But when wilt thou return?

Then the Guru thus answered:

When I put on my tenth dress I shall be called Gobind Singh; Then shall all Singhs wear their hair;

They shall accept the 'Pahal' of the two-edged Sword Then shall the Khalsa be established;

Then shall men exclaim 'Vaheguru' The four races shall become one and the same;

The five weapons shall be worn by all. In Kalyug they shall array themselves in vestments of blue;

The name of the Khalsa shall be everywhere. In the time of Aurangzeb

The wondrous Khalsa shall arise. Then shall battles be waged, Endless war shall ensue,

And fighting shall follow year after year. They shall place the name of Gobind Singh in their hearts.

When many heads shall be rendered up, The Empire of the Khalsa shall prevail.

First, they shall conquer Punjab; Then other countries shall be theirs;

Hindustan and the North shall be possessed by them; Then the west shall bow to them.

When they enter Khorasan, Kabul and Kandahar shall lie low.

When Iran has been laid prostrate, Arabia shall be conquered and they shall march on to Mecca.

Mecca shall be beheld, And Medina shall be seized.

Mighty shall be the rejoicing, And all shall exclaim 'Vaheguru'.

Unbelievers shall everywhere be destroyed; The holy Khalsa shall be exalted.

Beasts and Birds shall tremble in the presence of the Lord.

Men and Women shall everywhere call on God. The Earth, the Oceans and the Heavens shall call on God.

By calling on the Guru shall men be blessed. Every faith shall become of the Khalsa;

No other religion will remain. 'Vaheguru' shall everywhere be repeated,

And pain and trouble shall depart. In the Kalyug shall the Kingdom be established,

Which Nanak received from the Lord. Worthless, I fall before God;

Nanak, the slave, cannot comprehend the ways of the Lord. Thus replied Nanak to Kaarun's question.

Note the couplets " I shall return to resurrect the Khalsa", "All shall wear vestments of blue", "All Sikhs shall flock under his banner." These statements do not hang well with these sects. Their 'Guru' has not reserected the Khalsa so it follows that any second coming of Guru Gobind Singh Ji is yet to come. All shall wear blue, this is one of the colours of the Khalsa, most sects wear white. All Sikhs shall frock under his banner, most Sikhs reject these sects so it cannot be talking about them.

One boat is preserved at Uchch wherein Guru Nanak and Makhdum of Uchch travelled together to Mecca.

Urdu textbook which contained a poem by Iqbal in which he had paid rich tribute to him:.

The land where, Chishti delivered the message of truth.

The land where Nanak sang the song of God's oneness,

The land where the Tatars made their home,

The land which lured the Arabs from Arabia,

Meharban was contemporary of 5th Guru who also mentioned same thing in his Janamsakhi that NANAk went to mecca.