High IQ link to being vegetarian 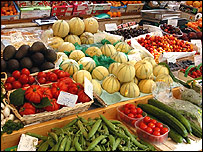 Vegetarianism has been linked to better heart health

A Southampton University team found those who were vegetarian by 30 had recorded five IQ points more on average at the age of 10.

Researchers said it could explain why people with higher IQ were healthier as a vegetarian diet was linked to lower heart disease and obesity rates.

The study of 8,179 was reported in the British Medical Journal.

Twenty years after the IQ tests were carried out in 1970, 366 of the participants said they were vegetarian - although more than 100 reported eating either fish or chicken.

There was no difference in IQ score between strict vegetarians and those who said they were vegetarian but who reported eating fish or chicken.

Researchers said the findings were partly related to better education and higher occupational social class, but it remained statistically significant after adjusting for these factors.

Vegetarians were more likely to be female, to be of higher occupational social class and to have higher academic or vocational qualifications than non-vegetarians.

However, these differences were not reflected in their annual income, which was similar to that of non-vegetarians.

Lead researcher Catharine Gale said: "The finding that children with greater intelligence are more likely to report being vegetarian as adults, together with the evidence on the potential benefits of a vegetarian diet on heart health, may help to explain why higher IQ in childhood or adolescence is linked with a reduced risk of coronary heart disease in adult life."

However, she added the link may be merely an example of many other lifestyle preferences that might be expected to vary with intelligence, such as choice of newspaper, but which may or may not have implications for health.

Liz O'Neill, of the Vegetarian Society, said: "We've always known that vegetarianism is an intelligent, compassionate choice benefiting animals, people and the environment.

"Now we've got the scientific evidence to prove it. Maybe that explains why many meat-reducers are keen to call themselves vegetarians when even they must know that vegetarians don't eat chicken, turkey or fish."

But Dr Frankie Phillips, of the British Dietetic Association, said: "It is like the chicken and the egg. Do people become vegetarian because they have a very high IQ or is it just that they tend to be more aware of health issues?"