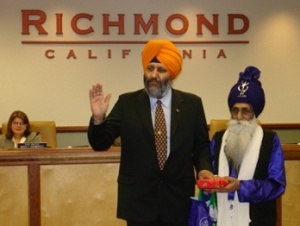 Harpreet Singh Sandhu an Amritdhari Sikh was appointed in January 2007 as the first Asian to serve as a member of the Richmond, California city council. A well known Sikh Activist in the Bay area he has served as the President of El Sobrante Gurdwara Sahib's management council for many years. Richmond, located just north of Berkeley, is a major city of over 100,000 people located just across the bay from the City of San Francisco.

Mr. Singh was sworn in on January 16, 2007 in the presence of Mayor Gayle McLaughlin, members of the California Sikh community and city officials gathered at City Hall. During the swearing-in ceremony Harpreet Singh said, "I will work not only for the development of the city but also for the country". He ended his speech with the Sikh daily prayer "Nanak Naam Chardikala Tere Bhane Sarbat Da Bhalla", explaining the meaning of Sarbat Da Bhalla: "For the Good of All". He was appointed to fill the vacancy left by Gayle McGlaughlin when she became mayor.

Sandhu was elected to represent Congressional District 7 as a delegate for Senator Obama at the National Democratic Convention held in Denver. During one of the speeches my wife and I were happy to see the camera zoom in on California's delegation which included a Sikh - though at the time we had no idea who he was (user:Allenwalla). Harpreet a Delegate at the DNC Convention, there to cast his vote for Obama. Posted on youtube at [1]

Support in the recent Election

Attorney General Brown, cited Richmond City Councilman Sandhu’s work on behalf of the Democratic Party and his stances on the environment and crime as the reasons for his support.

Driving North on Interstate I-80, my wife an I were on our way to a Gurdwara hoping to meet with Mr. Singh, who a bookstore owner in Berkeley had sent me to see. We had always seen the Gurdwara with its shining Golden Domes high on the hillside over looking the San Francisco Bay and had always wanted to stop.

Harpreet at DNC Convention representing Obama on youtube at [2]

Harpreet being interviewed at DNC convention on youtube at [3]