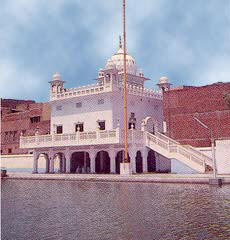 SANTOKHSAR SAHIB: When (Guru) Ram Das, had not yet ascended to the gaddi, he came here to find out a place for excavation of the holy tank on instructions from Guru Amar Das. When (Guru) Ram Das was getting the place dug, he found a Yogi, meditating. After sometime the Yogi opened his eyes and told Guru Ram Das that he had been meditating here for a long time, waiting for a Guru to give him salvation. He disclosed his name as Santakha and then breathed his last. The tank was then named as Santokhsar. Guru Arjan completed the unfinished work of excavation of tanks - Santokhsar and Amritsar. Baba Buddha was appointed to supervise the work of construction. Santokhsar was completed in 1587-89.