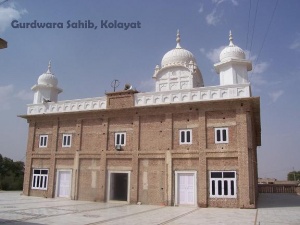 Gurdwara Sahib Kolayat, also known as Gurdwara Pehli Patshahi, is situated in the ancient town of Kolayat in Bikaner district. Kolayat, which is 52 kilometres away to the southwest of the district town, can be reached by rail and road. Kolayat is also known for a Hindu temple dedicated to Kapil Muni. Both Guru Nanak Dev and Guru Gobind Singh visited Kolayat.

Guru Nanak Shaib's Visit: Guru Nanak Sahib visited Kolayat during his Second Udasi to the south. Here guru ji had discourse with some Jains. They were called Dhoondiyas. Guru Sahib have discourse with dhoondiyas at various places during his journey and this place is included in them. Dhoondiyas have unhygenic habits of not bathing and keeping their mouth cover because they think that by bathing organism kills due to warmth of body and it would be a great sin. But guru ji guided them that one should be pure from heart, mind and soul but to live unhygienically is not a pious deed. It gave Birth to various diseases and it is not safe for other human beings too. All Dhoondiya Jains were shut after this discourse. Guru ji came here from Bikaner and continued his journey to other parts of Rajasthan.

Guru Gobind SIngh's Visit: Guru ji wrote the Zafarnama and sent Bhai Daya Singh to deliver the document to Aurangzeb. Bhai Daya Singh ji and his companion Bhai Dharam Singh ji returned to Malwa as guru sahib was planing to leave on his way south. They had sucessfully delivered the Guru's admonitory letter, the Zafarnama to Emperor Aurangzeb at Ahmadnagar - just before the Emperor's death. 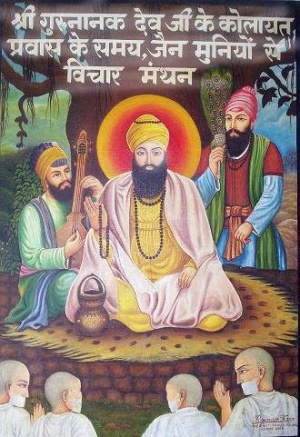 There being no Sikh population at Kolayat, no memorial or shrine was set up in honour of the Guru's visit until 1968, when some Sikh who had recently settled in the area constructed Gurdwara Sahib Kolayat in a single room near the bank of an artificial lake northeast of the town. It is served by a Sikh farmer whose farmhouse-cum-residence is close by. Sikhs from nearby villages and farmhouses assemble here to celebrate the birth anniversaries of Guru Nanak Dev and Guru Gobind Singh.

On a recent personal visit to the area (19 Oct 2009), the Gurdwara sahib was under construction. The Gurdwara is under baba Amrik Singh of Dukhniwaran Shaib, Patiala. Sangats from Punjab visit the Gurdwara for Sewa (selfless service). Langar is distributed 24 hrs.

Kolayat is situated on the Bikaner - Jaisalmer road. Visitors motering from South india are well advised not to take any shortcuts. Rajasthan is full of desert sands, only the main State Highways are trustworthy and well maintained; shortcuts are dangerous and full of sand. Learn from my personal experience, if you choose to try a shortcut you 'will' get stuck and find, as I did, that help may be miles away.