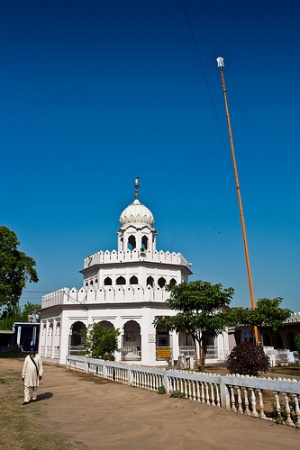 Gurudwara Qila Lohgarh Sahib , one and a half kilometre southwest of Takht Sri Kesgarh Sahib, marks the site of the fort of that name constructed by Guru Gobind Singh to pro-tect the riverside flank of Anandpur. It was here that Bhai Bachchittar Singh faced and turned back a drunken elephant which the hill chiefs, during their siege of Anandpur in 1700, had sent to batter down the gate of this fort. The present building, octagonal in shape and three-storeyed high with a dome on top, was constructed during the late 1980's. GURUDWARA SHRI QILA LOHGARH SAHIB is situated in the City of Anandpur Sahib in Ropar Distt. Its located in the outskirts of Shri Anandpur Sahib and is of Great Importance. It was second strongest Qila after Qila Anandgarh sahib as it was on southern side of city GURU SAHIB had set up a factory for manufacturing of arms. The hill armies attacked city Anandpur sahib many times but hesitated to attack the Qila as they wonn't be able to break its gate.On 1 september 1700 hill armies attacked this fort to break the gate of fort they brought the drunk elephant. With blessing from SHRI GURU GOBIND SINGH JI, Bhai Bachitar Singh Ji attacked the elephant with nagani spear (Still lying at SHRI KESGARH SAHIB). The wounded elephant retreated killing the soldiers from hill armies. Bhai uday singh Choped the head of Raja Kesari Chand on the same day here Only after sikhs evacuated this city in dec 1705 hill armies occupied this Qila and demolshed it