Gurudwara Qila Fatehgarh Sahib, situated on the northern outskirts of the town of Anandpur, marks the site of another fortress bearing this name. The present building was constructed during the late 1980's under the supervision of the successors of Sant Seva Singh of Qila Anandpur. The Gurdwara is a two-storeyed domed building. In front of it is an old well which once served the needs of Fatehgarh Fort. 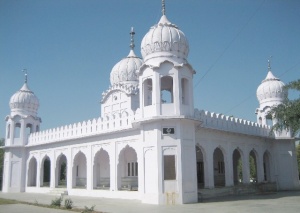 Qila Fatehgarh reminds us of the long, long struggle between the great defenders of 'Anandpuri' and the [[Mughal]s and their allies the Hindu Rajas, of the kingdoms around Anandpur, who saw the reforms of the Sikh Guru's, not as a shining example of what Hinduism could aspire for, (or might become), but as a greater threat to Hinduism and its caste system - than the Mughals.