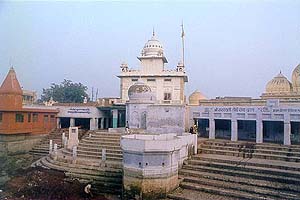 This Gurdwara is situated in Saraswati Bazaar, near Gurdwara Baoli Sahib, Pehowa. Situated on the banks of the river Saraswati, this Gurdwara commemorates the visits of the Sixth, Ninth and Tenth Gurus. The Sixth Guru, Shri Guru Hargobind Sahib Ji came to this place on the call of Baba Almast Ji to teach the yogis a lesson. He came to this place on his way from Kiratpur Sahib to Nanakmatta Sahib on the occasion of the Chet Chaudas fair.

The Ninth Guru, Guru Tegh Bahadur Ji stayed at this place on his way to Delhi to meet Emperor Aurangzeb. Guruji, on heeding the call of the Kashmiri Pandits against the forcible conversion to Islam and to protect the Hindu religion, was going to Delhi for the supreme sacrifice. The Tenth Guru, Guru Gobind Singh Ji spent some time here while on his way to the Solar Eclipse fair at Kurukshetra from Talwandi Sabo. He reached here from Gurdwara Jaura Sahib, village Siyana Saiyadan, after accepting a pair of wooden slippers from a devotee. A main hall and a langar hall constructed about 25 years ago are existing here.