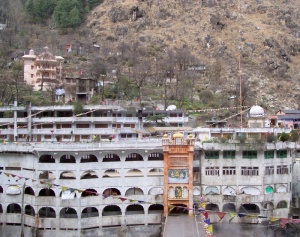 Gurdwara Shri Guru Nanak Dev Ji, also called Gurdwara Manikaran Sahib is situated in Manikaran, in Kullu District, 45 KM away from Kullu. The place was visited by Guru Nanak Dev during his travels. The serene location and the seemingly mysterious hot springs made Manikaran (Kullu) a place of pilgrimage in earlier times. Guru Nanak, the first Guru of the Sikhs, visited this place to spend time in meditation. A gurdwara that was built to commemorate his visit, is now a place of pilgrimage for the Sikhs. 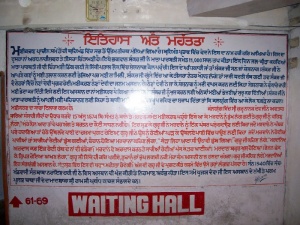 Sri Guru Nanak Dev ji was with his Sikhs in the Himalaya mountains of India. His sikhs were hungry and there was no food. Guru Nanak sent his Good Friend Bhai Mardana to collect food for langar (the Community Kitchen). Many people donated rice and flour (atta) to make parsadas (bread). The one problem was that there was no fire to cook the food. Guru Nanak than lifted a rock and a hot spring (hot water) appeared.

The Sikhs were able to make rice and beans. Bhai Mardana was having trouble making chapatis because they kept sinking. Bhai Mardana said, "I am going to donate my life in the name of God". At that the parsada (chapatis) amazingly floated. Guru Nanak Dev Ji said that anyone who donates his life in the name of God, all his (or her) drowned items float. This was a miracle. 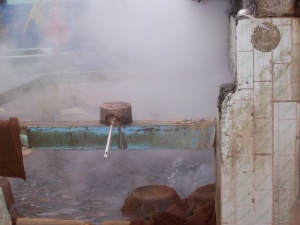 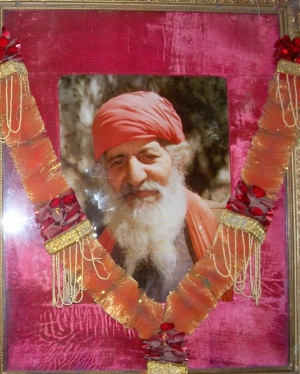 Saint Shri Narayan Hari came to Kullu in 1940 from his native place Kaimalpur (Pakistan) and settled in Manikaran. He also served at Hazur Sahib and Keshgarh Sahib. Initially there was nothing except two hot water springs.

According to local sources, he first built a small Gurdwara using timber, but local villagers protested and would come again and again to demolish it, but with blessings( santokh/sabar) of Guru Nanak Dev ji he would re-build it all over again every time but never indulged into any sort of violence with them. In fact Sant Narayan Hari ji used to offer those people water/tea whenever they got tired doing destruction,so finally locals gave up and he worked on the Gurudwara building and the 50 years long service bore fruit in the shape of present Gurudwara.

Saint Narayan Hari use to bring Cement and construction material from Bhuntar to Manikaran sahib on his back, and to construct the shrine. And, now this Gurudwara can accommodate more than 4000 people with free ‘Langer’ facility. Sri Narayan Hari had worked day and night to give Manikaran a proper name, the result of which the Gurudwara stands in a stately position today.

There is a cave called "garam gufa" or "hot cave" in Gurdwara sahib where people can sit for few hours to get rid of lot of diseases, it is done through natural healing. Sant Shri Narayan Hari ji died in 1991. At present his daughter, Mata Deva Ji and his son-in-law, Baba Shri Ram Ji look after the Gurdwara management, and serve the "sangat" (people who come to visit Gurdwara Manikaran sahib) with great affection and gratitude.