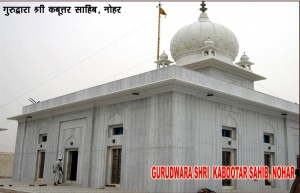 Gurdwara Kabutar Sahib is located in Nohar a tahsil in Ganganagar district of Rajastan. The Gurdwara is associated wita visit by Guru Gobind Singh who after leaving Sirsa in November of 1706, arrived at Nohar and camped near Chhip Talai, a pond southeast of the town. At a temple near his camp there were a lot of pigeons which gathered daily as the people of the village had taken to lovingly feeding them grain. Elders and children would made sounds imatating the calls of the pigeons and the children would be facinated as they watched them take flight, imagining how wonderful it would be if they could fly and soar through the sky.

It happened that one of the Guru's Sikhs trampled a kabutar (pigeon) accidentally which led to an angry protest from the local inhabitants who as Jains practiced ahimsa (non-violence) as a religious principle. The Guru, however, pacified them by having the bird treated by a barber-cum-surgeon. Soon a legend grew that the Guru had revived the dead pigeon with his spiritual power. The barber's family constructed a memorial platform which became an object of worship.

A Gurdwara was established at this site in 1908 with the efforts of a Sikh tahsildar, Lal Singh, and a Sikh settler of Dhani Raiyan. With the arrival of more Sikh families after the partition, a new building was constructed. Sant Fateh Singh, during a visit to the Gurdwara in 1958, named it Kabutar Sahib.

Baba Pritam Singh Sevawale of Sirsa acquired some space and constructed the present building complex including a spacious square hall with the square domed sanctum in the middle.

The town's rail station is a stop on the Hanumangarh-Sadulgarh (metre gauge) section of the Northern Railway. It is also connected by road with Sirsa in Haryana, 80 kilometres to the north.