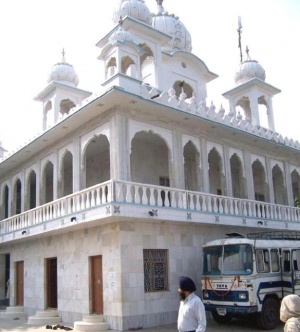 Where Guru Gobind Singh Ji And His Hundreds of Followers took Langar, From one small clay pitcher in the hut at the age of sixGurdwara Handi Sahib - Danapur is a cantonment station, 20 kilometres west of old Patna City. Guru Tegh Bahadur had returned to Punjab in April 1670 leaving his family behind at Patna. It was only after he had been at Kiratpur and Chakk Nanaki for a few months that he sent for the rest of the family to return. The family after leaving Patna Sahib made their first halt here. An old lady named Mai Pardhani served a kettleful (handi) of khichari (rice and lentils) to them after which the shrine subsequently built here was named as Handiwali Sangat, which is now called Gurdwara handi Sahib. It is housed in a small hall with verandah on three sides and a small brick-paved walled compound in front on the bank of a seasonal stream, Son Nadi.

This Gurudwara was built in the memory of Shri Guru Teg Bahadur Ji. As in 1728 Bala Preetam Ji with Mata Gujri and his family walked from Patna Sahib to Anandpur Sahib then Patna residents accompanied Shri Guru Gobind Singh Ji to see off him. At that time Guru Ji was 5.2 years old. People walked about 12 miles and reached Danapur. It was night time. Sangat of Danapur gave them a warm welcome and entertained them. An old lady whose name was Mata Jasni cooked Khichdi for Guru Ji with love & affection and put the pot(Haandi) of khichdi before Satguru Ji and requested him to eat. Seeing all this Satguru Ji impressed with her. Satguru Ji ate the khichdi and also served khichdi to the Sangat. Jasni Mai requested him to always be here. Then Satguru Ji said, so long khichdi would be cooked in that Handi and would be served to sangat, you would feel my presence here. Fortunate Mata followed the Guru ji's words and converted her house to a Dharamshala. She kept cooking the khichdi in that Handi and kept serving to sangat. So this place is known as Haandi Sahib.

After a short stay in Patna, Guru Tegh Bahadur made his programme for Punjab because the Hindus of Punjab were being threatened by force conversion into Islam under the fanatic policy of Aurangzeb. They were passing through a critical time. Instructions were given to Gobind Rai to reach Anandpur Saheb along with mother, grandmother maternal uncle at their convenience. Gobind Rai's departure from Patna to Punjab caused a great displeasure and sorrow to the inhabitants of Patna City. On the day of departure, men and women, Hindus and Muslims, old and young, rich and poor, and his playmates came a considerable way out of the city to see off the revered young prophet Gobind Rai. It was the most torturing scene when they bade farewell to Gobind Rai and his family members. All the admirers and devotee Sikhs prayed for their happy journey.

The perennial consolation left behind for devotees in Patna are sacred relics, which were dearer to Gobind Rai during his playtime with his companions. Another sweet memory, is the late evening prayer after his return 'from play which now has become tradition. Till now this practice of prayers is still in vogue.

The first stopper after departure from Patna, was made at Dinapur in the little house of old lady namely Yamuna Devi. This devoted old lady prepared Khichri for Gobind Rai in a little earthen pot (Handi). The prepared Khichri was served to a large no. of devotees and yet did not finish. Now there is a gurudwara after this pot namely 'HANDI SAHEB'. It is about 20km fromÂ Takhat Harimandirji Patna Saheb. An annual function is held under management of Prabandhak Committee Sri Takhat Harimandirji Patna Saheb.