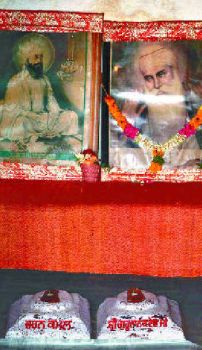 Gurudwara Nanak Dham, A famous shrine in remambrance of Guru Nanak is situated in Rameshwaraam in Tamil Nadu. Rameswaram is well known as a pilgrim centre for Hindus. Equally famous is the Gurunanak Dham (Gurudwara) situated here. Sikhs believe that Guru Nanak stayed here 500 years ago.

According to the the Sri Gurunanak Sat Sangh Sabha and Educational Society, which maintains the Gurudwara, Sri Guru Nanak visited Rameswaram on 1511 and stayed for 19 days on his return journey from Sri Lanka, where he preached to break the barriers of passion and prejudice. He made significant contribution in solving the problems of Shivnabh, King of Sri Lanka, and 18 others.

During his stay in Rameswaram, Gurunanak found the water in the island saline. But the spring that Gurunanak created by digging the soil produced sweet water. Devotees still have presrved the small `mandapam,' where Sri Gurunanak stayed and the well. 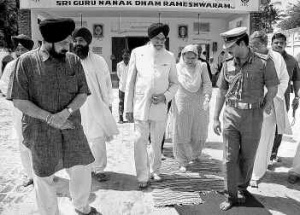 S.S Barnala Coming Out From Gurudwara

The Governor of Tamil Nadu, Surjeet Singh Barnala, during his first stint in the gubernatorial office, visited Rameswaram. Mr. Barnala arranged donations from Sikhs living in and around Tamil Nadu to construct a Gurudwara in Rameswaram. He himself performed. Now, the sprawling 2.5 acres campus of Gurunanak Dham offers peace and solace to pilgrims who come from different parts of the country.

Sri Gurunanak Sat Sangh Sabha, Chennai, under the leadership of Rachhpal Singh Kalsi and Inderjit Singh Grewal, runs the Gurudwara. "Though it is situated at the extreme end of the country's map, pilgrims even from Punjab visit here. There are 24 rooms in the campus and stay is free of cost. Steps have been taken to include the Gurudwara in the list of pilgrims and tourism-interested places in Rameswaram," says Bawit Singh Dhindsa, Manager, Sri Gurunanak Dham.

A Letter By Davinder Singh Toki

Thanks for a complimentary copy of Abstracts of Sikh Studies. I am pleased to read in it the news about the celebration of the Birth of the Khalsa by the Sikh sangats of South India at Sri Guru Nanak Dham, Rameshwaram. I am pleased because in 1976, I was only 'the third Sikh to visit the place in the previous ten years'.

I visited this place exactly twenty years ago on 3rd of August, 1976 after attending a Trade Union Conference at Trivendrum (now Thiruvanthapuram) in Kerala. I was accompanied by some other Hindu colleagues, and stayed there for a day. On reaching the island by train, a guide was engaged who took us all around the Rameshwaram temples, and during this tour the guide informed me about a Sikh gurdwara in the town. I wanted to locate the gurdwara. So I enquired from various people, but none could tell. Even Rameshwaram Post Office could not provide the information. They, however, mentioned a Pensioner Sikh who was receiving his pension through the Post Office. On my request, he sent a man to lead us to that Pensioner's home. On reaching there, it was found to be the Sikh gurdwara, but generally known as Chandu Lal Math. In this gurdwara lived the same Sikh Pensioner, , named Harcharan Singh, an Ex I.A.F. man belonging to District Hoshiarpur in Punjab. There was no Sikh Community at Rameshwaram, so it was very difficult for him to run a gurdwara.

This place was set up by one Sh. Chandu Lal Bedi belonging to Dera Baba Nanak in Gurdaspur District, Punjab, who was a Minister in the Hyderabad Deccan regime. He also set up gurdwaras at other places in the South which were visited by Sri Guru Nanak Dev ji. Sardar Harcharan Singh told me that I was the third Sikh to visit the place in the previous ten years. First was a Sikh lady, and then Dr Kirpal Singh, author of Janamsakhi Parampra, published by Punjabi University, Patiala, and I was the third Sikh to visit the place. Dr Kirpal Singh has mentioned this gurdwara in his book, and recorded when the place was set up by Sh. Chandu Lal Bedi. A Beed of Sri Guru Granth Sahib was also kept there, but it became too old to be recited, as many pages in the beginning and at the end were mutilated. Dr Kirpal Singh promised to send a new Beed of Sri Guru Granth Sahib, which he did send, and it was available for recitation at the time of my visit in August, 1976.

Sardar Harcharan Singh informed me that he is holding one Sahaj Path every month. He had learned the Tamil language, and had become friendly with the local people, who used to come there at noon time. Sakhis from the life of Guru Nanak Dev ji were narrated to them. Keeping in view the maintenance of the gurdwara consisting of four rooms, inner compound and water-well, he had sown some coconut trees in the backyard to provide a source of income for the gurdwara. I do not know whether S. Harcharan Singh is alive now or dead, but his services in the given circumstances were commendable.

What I want to discuss here is that after the Partition, we have been praying for free access to and sewa at the gurdwaras separated from us, but do not care for those gurdwaras in India itself where our Gurus went on their historic missions. For example, the Rameshwaram gurdwara is in a dilapidated state and may crumble, if no care is taken. Gurdwaras in such places where there is no Sikh community need attention. Dr Kirpal Singh in his above mentioned book which is based on four different Janamsakhis of Sri Guru Nanak Dev Ji written by Meharban, Bhai Bala, Bhai Mani Singh and Walayatwali Janamsakhi, has mentioned many gurdwaras which are now in ruins and need rebuilding and proper care. In the South, the gurdwaras at Sri Rangam Trichnapally, Tirumalat, Kachipuram and Rameshwaram, all in Tamilnadu, and Guntur in Andhra Pradesh, Tilganji Sahib (Kundikutlam) near Palamkotai (Kerala) and in Bharaach (Gujarat), have been mentioned, but we never remember them in our Ardas or otherwise.

Now that Sikh sangats of the South have decided to celebrate gurpurbs at Nanak Dham Rameshwaram, they should also take care of other gurdwaras in Tamilnadu and Kerala. Other gurpurbs can be celebrated at other gurdwaras in rotation. The gurdwaras are perhaps in custody of Udasi Sants. The correct history of the visit of the concerned Gurus and their Sikhs and other related matters be brought in print, so that Sikhs from Punjab and Delhi, etc., may visit these places.