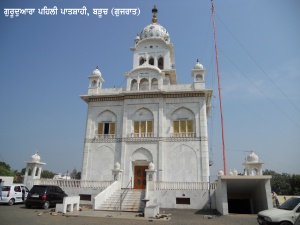 Gurdwara Pehli Patshahi is a Memorial Shrine present in Bharuch City, which was made in memory of Baba Nanak visit during his Missionary Journey. From here Guru Nanak Dev continued his journey to North India. Bharuch is a famous city of Gujarat State(India) situated on the banks of river Narmada and located about 70kms from Vadodara. The Shrine is present on banks of river.

According to Sikh Mythology, When Guru Sahib reachad at the bank of the river,the local king denied boat to Guru Sahib then Guru Sahib asked Bhai Mardana to lay Chadar on the water. Bhai Mardana obeyed the order of the Guru and to very much surprise for the king they crossed the river on Chadar , Gurdwara Sahib has been named as Chadar Sahib.

Sikhs have been demanding for a road along the bank straight to the Gurdwara Sahib as due to encroachment the path has narrowed and its difficult to rech the building in vehicle. Abig Langar Hall has been constructed which will be used for parking if th demand for road is met.