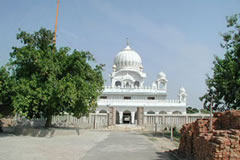 GURUDWARA BAD TIRATH SAHIB VILLAGE HARIPURA Gurdwara Bad Tirath Sahib is associated with the First Guru, Guru Nanak Dev Ji as well as the Tenth Guru, Guru Gobind Singh Ji. A deep pool of water to the north of the village, was an ancient place of pilgrimage known as Bad Tirath. Guru Nanak Dev Ji along with Bala and Mardana , visited this place during his First Udasi while Guru Gobind Singh Ji came here after the battle of Muktsar. When Guru Nanak Dev Ji came here, a demon, or a rakhsasa, had terrorized the people of village Haripura. The villagers narrated their tale of woe to Guru Ji, who blessed them and told them not to worry hence forth. It so happened that the demon came to the village while Guru Ji was present. He bowed before Guru Nanak Dev Ji and requested him for salvation, or Mukti. Guru Ji blessed him and told him to serve the people and respect place of worship and he would attain salvation. The demon responded positively and thereafter never disturbed the people of Haripura again. Guru Gobind Singh Ji came here on his way to Nanded. He blessed this place with five arrow tips which are still preserved by the Namdharis in Gurdwara Bhaini Sahib, near Ludhiana. The gurdwara is affiliated with the Shiromani Gurdwara Parbhandak Committee.Although it is managed by a local committee. The Birthday of Guru Nanak Devji is celebrated with great fervor here. Amavasya (new moon day) of every month is also celebrated.