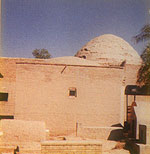 Gurudwara Baba Nanak, Baghdad, Iraq The gurudwara was founded Mohamad Pasha Amoot, follower of Pir Bakol at the time of Guru Nanak's visit in the year 927 AH(1520-1A.D). Among religious celebrations, till march 1989, a regular weekly Diwan and Langer was held. Presently weekly Diwan is held every Friday. Langer is not permitted by the authorities. The emigrant Indian community comprising Hndus and Sikhs numbered around 8000 in 1989.

Baghdad, capital of Iraq, was visited by Guru Nanak Dev on his way back from Mecca and Madina. He stayed outside the city of the west of Dajala (Tigris) River, about two kilometers north of Baghdad West railway station. He held discourses with Sajjadanashins (caretaker of mausoleum) of the mausoleums of Abdul Qadir gilani and Bahlol the Wise, who were greatly impressed by his views on God and religion. After the Guru's departure, they raised a memorial in the form of a platform where the Guru had sat and discoursed. After some time when a room was constructed over the platform, a stone slab with the following inscription in Turki was installed in it:

Lo ! the Great God hath fulfilled the wish. A new building for Baba Nanak Darvesh has been constructed. Seven holy men extended their help in the construction. Its date as reckoned comes to 927. The lucky disciple caused a new current of water from the earth.

The last sentence is the customary phrase to work out the date according to alphabetical key. The date is 927 A.H. which correspond to A.D. 1520.

This inscription was first noticed by Swami Anandacharya who mentioned it in his book Snow Birds. Sikh soldiers who went to Iraq during the First World War, 1914-18, raised a Gurdwara here, but now only the room exists which is visited by Sikh and non-Sikh Punjabis who have gone to the oil-rich Iraq as workmen during decades. However, as it is located within the graveyard, visitors are banned from staying overnight, cooking meals, holding Langar and Kirtan in view of the sensitivities of the majority of Muslim community

After having travelled to Madina, Guru Nanak Dev ji soon arrived in Baghdad and took up a position, along with Mardana, outside the city. Guru Nanak Dev ji shouted the call to prayer, on which the whole population became wrapt in silent astonishment – the Guru omitted the usual words Muhammad ar Rasul Allah, and substituted Arabic words of a similar sound to express his own ideas, hence the astonishment.

The pir (saint) of Baghdad, Bahlol Dana on meeting face to face with the enthusiastic stranger, inquired who he was and to what sect he belonged. The Guru greeted him with his customary ‘Sat Kartar’ and replied, “I have appeared in this age to indicate the way unto men. I reject all sects, and only know one God, whom I recognise in the earth, the heavens, and in all directions.”

Upon this the Guru began to repeat the Japji. As the pir listened to his doctrines he said, “This is a very impious fakir. He is working miracles here, and informing us, contrary to the authority of our Holy Quran, that there are hundreds of nether and upper regions, and that at last men grow weary of searching for them.”

There are nether worlds beneath nether worlds, and hundreds of thousands of heavenly worlds above. The Vedas say that you can search and search for them all, until you grow weary. The scriptures say that there are 18,000 worlds, but in reality, there is only One Universe. If you try to write an account of this, you will surely finish yourself before you finish writing it. O Nanak, call Him Great! He Himself knows Himself. ||22||

The pir then called upon the Guru to give a manifestation of his power. Upon this, it is said, the Guru laid his hand on the high priest’s son and showed him the upper and lower regions described in the Japji.

A monument built by the successors and followers of a Muslim Sage Abdul Kadir better known as Pir Dastgir (1078-1166 AD) and Behlol stands one and a half miles east of railway station in Baghdad. The translation of the Arabic inscription on a slab on the wall behind the monument, where Guru Nanak had discourse with the Muslim sage Behlol, reads some-what like this-

"In Guru, that is the divine sage Baba Nanak Fakir's commemoration, this monument has been rebuilt. The holy sage bestowed the spring of divine benediction in 927 Hijri, 1520/1 AD"

Gurudwara in Iraq damaged, Amarinder writes to US

Message Board Is the US acting as a sole superpower by snubbing UN?

Post your views New Delhi: The 60-year old Guru Nanak's gurudwara in Baghdad has been damaged in the recent military hostilities in Iraq, according to information reaching New Delhi.

Punjab Chief Minister Amarinder Singh has taken up the matter with the US seeking details about the condition of the gurudwara.

Singh has written a letter to the US Ambassador Robert Blackwill, proposing that former Secretary in the External Affairs Ministry be allowed to visit Iraq for an assessment of the situation. R S Kalha was also the Indian Ambassador to Iraq during 1992-94.

The present gurudwara was constructed in April 1943 by a Sikh engineers regiment. It has undergone some renovations and modifications in the succeeding years with the help of funds from devotees.

It is generally believed that Guru Nanak visited Baghdad while on his way to Mecca and Medina.

History has it that the place where the Caliph of Baghdad and other Sufi saints met with Guru Nanak was marked by a gurudwara located at the existing site near the Baghdad-Samara railway station.

After several decades of obscurity, the gurudwara was discovered in 1917 by a Sikh engineers regiment. The discovery was announced by Subedar Fateh Singh on May 9, 1918. A tablet in Turkish also marks the spot.