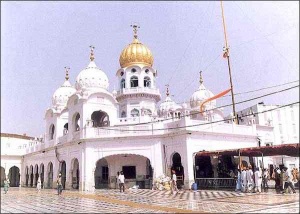 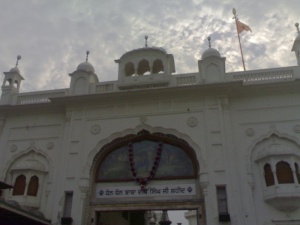 Gurdwara Baba Deep Singh is located outside Chatiwind Gate in Amritsar. It commemorates the unrivaled martyrdom of Baba Deep Singh ji who fought valiantly and dauntlessly along with thousands of Sikhs, whom he had famously dared to cross his line drawn in the sand, in 1757 to liberate Harimandir Sahib from the defiled clutches of Afgani invaders. Sardar Jassa Singh Ramgarhia constructed a memorial to the famed martyr. In the 19th century Akali Phula Singh replaced the memorial platform into a magnificent gurdwara. The Shiromani Gurdwara Prabandhak Committee enlarged and developed this important gurdwara into the present complex in the early 1920s.

Gurdwara Baba Deep Singh near the Chativind Gate of the walled city com-memorates the martyrdom of Baba Dip Singh (q.v.) of the Shahid Misi, who, coming from Damdama Sahib (Talvandi Sabo) in Bathinda district to liberate the Darbar Sahib, which had been attacked and desecrated by the Afghan invaders, was mortally wounded here on 11 November 1757. Jassa Singh (d. 1803) of Ramgarhia misi raised a memorial platform on the site which was later developed into a gurdwara by Akali Phula Singh (d. 1823). Long under the management of the descendants of Sardar Karam Singh of Shahid misl, it was handed over to the Shiromani Gurdwara Parbandhak Committee in 1924. The surrounding estate owned by the descendants of Jassa Singh Ramgarhia was also donated later to the Gurudwara Shahidganj.