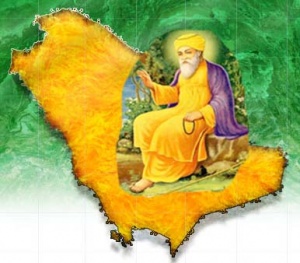 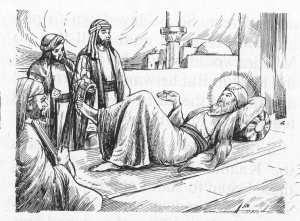 Please turn my feet away from the direction of God

For over twenty years from about 1497, Guru Nanak had been on his travels. He had visited all parts of India. He had been to the east as far as Assam and Burma. To the South he had gone as far as Sri Lanka (previously called Ceylon). To the north he had gone even to places outside India. Crossing the Himalayas, he had visited Tibet and China. He had travelled on foot. What a tireless traveller he was!

He had travelled so long and so far, but he was not yet satisfied. He now decided to go towards the west. His aim was to visit Muslim countries. He wanted to visit also, the Muslim mosques in those countries. He chose Mecca as the first such place to visit. Mecca is in Saudi Arabia. It contains the most sacred Muslim mosque called the "Kaaba" or the House of God. .....More