Everything is under construction 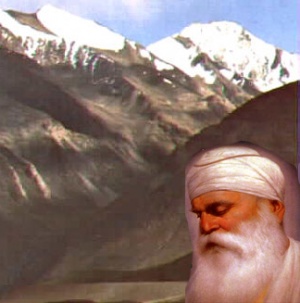 Guru Nanak visited the present country of Afghanistan in 1521. He went there during his fourth Udasi (journey). He visited Afghanistan twice. For the first time during the return journey from the Middle East (Mecca, Medina etc) and the second time when he took Shazda (son of Bhai Mardana) to Khorram Shahr (Iran).

According to the Bhai Bala Janamsakhi, the Guru visited Baghdad, Karbala & Basrah (Iraq), Bushehar, Khorram Shahr (Iran) to Kandahar, Ghazni & Kabul (Afghanistan). This route rather seems to be correct.

From Kabul, the Guru proceeded to Jalalabad, Sultanpur and passed through Khyber Pass to reach Peshawar. On his way he passed through Mehds. Bhai Mani Singh's Janamsakhi makes a reference of his visit to this place. 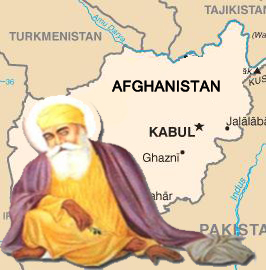 The Guru revolved a mosque in Kabul too. Since the visit of Guru Nanak to Kabul, the Sikh contacts had been carefully maintained. Sikh preachers were stationed there to disseminate the teachings of the Guru. At one time Bhai Gurdas also served as one of the Sikh missionaries at Kabul.

In Gharuka, 25 kms from Kabul, It is said that the sand gaters in the form of a mount during the day and spreads out during the night. Early in the morning the noise of the horses' hoofs is heard. The music is also heard during the night. There is a Sikh temple at Gharuka in honour of the vist of the Guru.

In Hazara, the disciples of the Guru in the area are known as Mureed Nanaki. It is said that because of the faith of the people, the impression of the Panja (hand print) of the Guru is seen on the Prasad.

The Guru went to Kandahar during his journeys. He met a peer and there was debate held between Guru Sahib and peer. At that time Bhai Bala & Bhai Mardana was also with them.

There are Gurdwaras at Jalalabad and Sultanpur to mark his visit. There are springs of water associated with his visit.

This article is a stub. You can help SikhiWiki by expanding it.