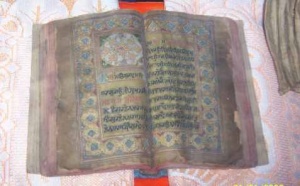 Most historians maintain that [[Guru Hargobind[[ Sahib after his release from Gwalior Fort in 1619 A.D. returned to Amritsar and later visited Kashmir, sometimes during 1620 AD. He followed the longer route, through Gujrat- Bhimber and Pir Panjal Pass, with a view to preaching Guru Nanak’s message of universal love.

All along this route, at many places, there are Gurdwaras commemorating this historical event. On his return journey Guru Sahib traveled along the right bank of Jhelum river and passed through Baramulla, Uri, Kathai, Dopatta, Khanda, and Muzaffarabad. Beautiful Gurdwaras were built at these places also, but beyond Uri, all the places are now under Pakistani occupation.

From Muzaffarabad, it seems, Guru Sahib, continued his journey along the bank of Jhelum and crossing it down stream, entered Punjab, because along the other route via Pakhli (NWFP), there are no Gurdwaras connected with this event, throughout the expanse of land down to Hassanabdal (Punja Sahib).

Some historians, e.g. Gyani Gian Singh, M.A. Macauliffe, J. D. Cunningham, Prof. Hari Ram Gupta, and the author of Gurbilas Patshahi Chheveen, say that Guru Hargobind Sahib accompanied Emperor Jahangir during his tour of Kashmir via Bhimber - Pir Panjal Pass. The author of "Jammu Kashmir-Di-Sikh Twarikh", Jasbir Singh Sarna has repeated this, and goes a little farther to say that, at Srinagar, Emperor Jahangir had his camp in Nishat garden, while Guru Sahib was camping in nearby Shalimar.

Quoting Gurbilas Patshahi Chheveen, he writes that Begum Noor Jahan visited Guru Hargobind’s camp to pay her obeisance, because she was favorably inclined towards the Guru. He further says that it was Bhai Suthra Shah, who conveyed Begum Noor Jahan’s intention to visit Guru’s camp at Shalimar garden.

While examining the theory, regarding Guru Hargobind Sahib and Emperor Jahangir traveling together, via Pir Panjal Pass, during 1620 AD, one finds that it is probably incorrect in face of the historical records. Jahangir’s own diary Tuzuk-i-Jahangiri provides an irrefutable evidence to this.

Although Jahangir had visited Kashmir twice earlier during the period of Emperor Akbar, but after ascending the throne, he entered the valley in 1620 AD for the first time. He came again in 1622 AD, but both the times he did not enter Kashmir via Bhimber-Pir Panjal Pass. On the other hand, he abandoned this route, on being informed that Pir Panjal Pass was under thick snow and therefore was not fit for crossing over, during the month of March 1620 AD, when the royal camp was marching towards Kashmir.

Consequently, he changed the route and instead marched ahead, via Pakhli, NWFP. From Rohtas fort (Punjab) he proceeded to Hassan Abdal (Punja Sahib) and passing through Dhamtor and Hazara, he reached on the bank of river Nain-Sukh (Present Garhi Habibullah). From there crossing "Dub-gali" pass, he landed on the bank of river Kishanganga (present Muzaffarabad) and thenceforward followed the route along the right bank of river Jhelum. On his return journey Jahangir traveled via Hirpur-Pir Panjal Pass and, crossing Bhimber gali, reached Lahore via Makhiala Jahangirabad. This was the time when saffron crop was in full bloom and Pir Panjal Pass was clear of snow.

It is worthwhile to mention here that crossing Pir Panjal Pass (11,460 feet above sea level), when it is under deep snow, is unthinkable, till late summer, when the snow gets melted sometimes during post-Monsoon period.

This implies that while Jahangir entered the valley during March 1620 AD via Muzaffarabad - Baramulla, the Pir Panjal Pass was under thick cover of snow. It is why Guru Hargobind Sahib also could not have entered the valley via this pass before later half of the summer of 1620 AD. On his return journey, towards autumn, he had to follow the alternate route via Baramulla Muzaffarabad. This was necessary also, for the reason that Guru Sahib’s tour of Kashmir was not a pleasure trip. He had come to bless Mata Bhag Bhari and the Sikh Sangat of this whole northern part of the country, long after it was touched by the holy feet of Guru Nanak, about a century back.

The above facts disprove the common belief that Guru Hargobind Sahib and Jahangir traveled to and fro Kashmir together. The fact is that they entered and left the valley from altogether different routes, and at different periods of time, independently.

Regarding the narrative of Begum Noor Jahan coming to visit Guru Hargobind Sahib’s camp in Shalimar garden, as described in Jasbir Singh Sarna’s book, it is enough to say that Nishat garden was non-existent at that time, and came into being much later, during 1668-71 AD i.e. about forty two years after Jahangir’s death in 1627 AD.

The learned author Jasbir Singh Sarna says that it was Bhai Suthra Shah, who conveyed to Guru Sahib about Noor Jahan’s intention to visit the Guru’s camp in Shalimar Garden, but on page 167 of his book he has recorded that Guru Hargobind Sahib, during one of his hunting expeditions near Baramulla, noticed a newly born child with visible teeth in his mouth, who had been abandoned by his parents, thinking him to be of evil omen. Guru Sahib asked his followers to lift the child, who was fostered under the care of the Guru, and later on became famous humorist Bhai Suthra Shah.

How this Suthra Shah could be present at non-existent Nishat Shalimar garden, so grown up as to act as a messenger between Guru Sahib and Begum Noor Jahan, when he was found as a newly-born child abandoned in a bush, months later, during the return journey of the Guru?

The entire narrative covering the journey of Guru Hargobind Sahib with the Royal camp via Pir Panjal Pass, their camping in Shalimar and Nishat and Noor Jahan Suthra Shah episode, as contained in "Jammu Kashmir-di-Sikh Tawarikh" is therefore merely a flight of imagination and is incorrect historically, as discussed above.

As recorded by Jahangir in his personal chronicle, he stayed in the palace at Koh-i-maran (Hari Parbat). Noor Jahan the queen might have possibly come to pay respects to Guru Hargobind Sahib from there to his Kathi Darwaza Camp, which is located at the foot of ‘Hari Parbat’.Gurdwara Chatti Patshahi,Kathi Darwaja,Rainwari,Srinagar is built here to mark the visit.