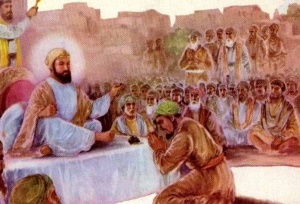 The Emperor Shah Jahan had four sons: Dara Shikoh, Shuja Muhammad, Aurangzeb, and Murad Baksh. Dara Shikoh was the heir-apparent, and was very dear to his father.

Aurangzeb was very cunning, clever and ambitious, and was fixated on succeeding to the throne. He administered tiger’s whiskers in a dish to his eldest brother and he became dangerously ill as a result. Astrologers were sent for, pirs and fakirs were called, all known charms, spells and incantations were tried but to no avail.

Wise men were assembled together and they came to the decision that until the tiger’s whiskers could be removed, there was no hope of a recovery. They were of the opinion that if two ounces of chebulic myrobalan (scientific name: termininalia chebula; known in Ayurvedic medicine as Aralu, credited with having laxative and stomachic properties) and a clove weighing one masha were administered, his health could be restored.

The Emperor searched everywhere for the ingredients but they could not be found – it was only until his Prime Minister, who had heard of Guru Har Rai Sahib Jis’ fame, was informed that there were available from Guru Sahib’s storehouse, that hope was restored.

Although the Emperor was hostile to Guru Ji, yet as Guru Sahib’s house was a mine of sympathy and compassion for all, there was no doubt that he would grant the articles required.

The Emperor humbled himself before the king of kings Satguru Sri Guru Har Rai Sahib Ji and sent a letter. Guru Sahib was pleased that the Emperor had such confidence in him as to write such a friendly letter, and consented to give the required medicines.

“Behold,” said Guru Ji , “with one hand man breaks flowers and with one hand offers them, but the flowers perfume both hands alike. The axe cuts the sandal tree, yet the sandal perfumes the axe. The Guru ought, therefore, to return good for evil.”

The ingredients were weighed and it was explained that these medicines would cause the hardest substance taken to be digested. To these ingredients, Guru Ji added a pearl which was to be ground and used as a subsidiary remedy.

The Emperor was naturally very pleased and forgot all his enemity with Guru Sahib, and vowed that he would never again cause him annoyance. His medicine was administered and effected a speedy and complete cure.