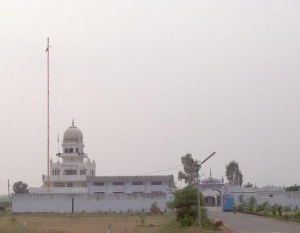 Guru Hargobind je stayed at this place while moving from Garna Sahib to Kiratpur Sahib for hunting a lion. Here there was a Muslim priest who served Guru jee. Guru jee gave blessings to that priest that you will be called as Jahara(Pragat Roop Karkey)(Pragat Hona Pratakh hai) Peer and people will pray you. There is an old well of guru's time, which is covered know.

The main building of the Gurdwara is under construction. There is an old well which is covered. They use to light a Diva or Lamp in the name of that Muslim Peer, whom the guru called Jahra Peer. Here the Fair of Basant Panchami is famous.

The gurdwara is situated at the distance of 1.5 Miles from Hoshiarpur railway Station.