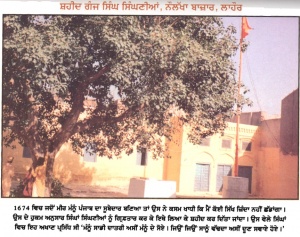 Gurdwara Shahid Ganj Sighnian, a historical Gurdwara is situated opposite the Shahid Ganj Bhai Taru Singh in Lahore. According to both the oral traditions of the women of the Panjab and to the writings of some historians, about two and a half lakhs (250,000) Sikh families—men, women and children of all ages were martyred at this site. The suffering and heroic deeds of the women, who held fast to their beliefs and died rather than giving in to the tyranny of the fanatical Mir Mannu, have been immortalized in the naming of this Gurdwara — Shahid Ganj Singhnian.

After he had defeated Ahmad Shah Durrani, in the battle of Manupur, when Muin-ulMulk, nicknamed Mir Mannu by the Sikhs assumed the governorship of Punjab in march 1748, he announced his intensions to exterminate the Sikhs of the Punjab, both root and branch. First according to Syad Muhammad Latif, in his History of the Panjab, his first act was to storm the fortress of Ram Rauni, in Amritsar, where 500 Sikhs had taken shelter. He then stationed detachments of troops in all parts with any Sikh inhabitants to apprehend them and shave their heads and beards. This drove the Sikhs to seek refuge in the mountains and jungles. Mannu issued orders to the hill chiefs to seize Sikhs and send them in irons to Lahore. He offered a 10 rupee reward for the head of any Sikh. Rewards were even offered for info on any Sikh's whereabouts. Hundreds of Sikhs were thus brought daily to Lahore where, refusing to convert to Islam, the men were quickly beheaded.

Their wives and children were to suffer much longer. Offered an 'easy out' if they would only convert, the women bravely refused and were put to work as prison laborers. Often brutalized and raped they had to listen on as their children were tortured and even butchered. Their bodies being cut to pieces. Their limbs were fashioned into garlands which were draped around the women's, even around their own mother's necks. On the basement floors of this building, Mir Mannu's prison, the women were slowly starved and worked to death as they were forced in their weakened condition to mill tons of grain each day.

The fighting and reprisals went on until the death of Mannu on 4 November 1753 of an accidental fall from his horse.

The Sikhs fought to death, and freed the remaining women and children. When Diwan Kaura Mal's men gave assistance to Mir Manu in Multan expedition, they got possession of this place. The Sikhs started reciting Sri Guru Granth Sahib at this place and a Gurdwara was constructed. It gained importance when the sardars of the Bhangi Misl captured Lahore. Shere-i-Punjab, Maharaja Ranjit Singh would visit this shrine two or three times a week to pay his homage. The Maharaja granted a jagir to this Gurdwara but the management remained with the Mahants. On 1st December A.D. 1934, Shiromani Committee took over the management of this historic holy place. Unfortunately after the partition, this shrine was abandoned. Today, the management of this place is with the Waqf board. Although the building is in good condition the Guru Granth Sahib is not placed.