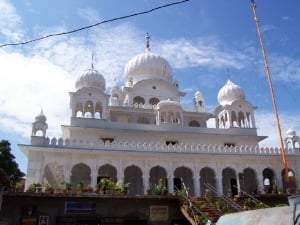 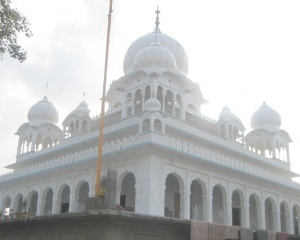 Once during rainy season, when beam of Mata Raj Kaur's house started to collapse, Mata Ji sent one of her follower to a wealthy person Bhaara Mall & who told Bhaara mall that beam of Mata Ji's house is about to collapse & Mata Ji has asked to get a pillar put underneath the beam. Bhaara Mall did not pay any attention to this. Then Mata Ji sent her follower to Garibu Jatt. Garibu Jatt cut a the trunk of a Ber tree & placed it underneath the beam overnight. Mata Ji got pleased with his service & asked him for his wish. Garibu requested with folded hands that his generations to come should not become a subject of the King but they should become Kings. Mata Ji gave him a boon that he will become a King & Bhaara Mall will be a tenant under him. With the boon of Mata Raj Kaur, Garibu Jatt became a King & Bhaara Mall a tenant. This article is written in Bhai Santokh Singh's "Sooraj Prakash" on page number 4715-4718. 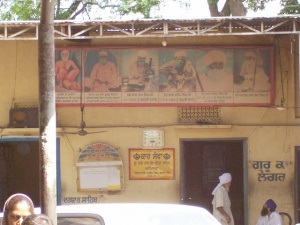 This Gurdwara Sahib was the resedential house of Mata Raj Kaur. Mata Ji left for heavenly abode at this place only & her interment exists at Gurudwara Dehra Sahib. Whoever comes to vist Mata Ji's interment, all their wishes are fulfilled.

When Guru Gobind Singh came from Battle of Bhangani during Samat 1745 Bikrami 28 Kattak Soodi 15, came to Kapaal Mochan, then Guru Ji went by foot from Kapaal Mochan via Rani Raipur, reached Mata Raj Kaur's place in Manimajra on Maghar Vadi 10 Samat 1745 Bikrami. Guru Ji spent some time with Mata Ji and told her that whenever she calls for him, he will surely come for her service. Guru ji went from here to his follower Saadak Chaudhary Nihang Khan at village Kotla & reached there on Masseya. This article is available in Martyr Bilaas Bhai Mani Singh poet Seva Singh Kaushal literary production. Gurdwara Manji Sahib is a Holy place where Mata Raj Kaur & Guru Gobind Singh visited & made this Manimajra village a holy place. Whoever comes to this place with devotion, all their wishes are fulfilled.

The Gurdwara is located in between the Manimajra town of Chandigarh. the road goes straight from Fun Republic Cinema and after 700 Meters you will find gurdwara on left side. This Gurdwara is a km away from Gurdwara Koohni Sahib.