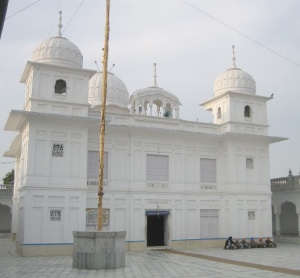 Gurdwara Mal Akhara Sahib was the family home of Guru Angad Dev. It is a historic and ancient Gurdwara, a place of many Sikh historic firsts. The Gurdwara is situated in Khadoor Sahib, the city in Tarn Taran Distt. After Baba Budhaa Ji urged Guru Sahib to appear before the Sangat, the first gathering of the Sangat was organized here. For this, a Langar of Kheer was prepared by Mata Khivi Ji with her own hands.

Guru Sahib is credited with reorganizing the old Punjabi 'alphabet' in to a simplified alphabet now known as Gurmukhi. It was in this script in which Guru Angad Dev Ji complied the Hymns of Guru Nanak Dev Ji. To Guru Nanak's traditions of Sangat and Langar, Guru Angad Dev Ji added the Sikh tradition of learning and literature. He took great interest in the education of children; teaching at first in his home, he started the first school of Gurmukhi, going on to find additional schools in the area. To improve the health and fitness of the children, he organized wrestling matches, hence the name Gurdwara Mal Akhara Sahib. Balwand and Satta, well known minstrels of the times, would entertain the Sangat with vocal and instrumental music at night.

Before passing the Guruship to Shri Amardas (Guru Amardas), Guru Angad was sought out by the Mughal Emperor Humayun who was seeking the spiritual assistance of Guru Sahib in reclaiming his throne. At the time, Humayun was being pursued by Sher Shah Suri. Before fleeing Punjab for the Persian Court, Guru Angad Dev Ji is said to have told Humayun that he would one day reclaim his throne, advising him to be a reverent and kind ruler.