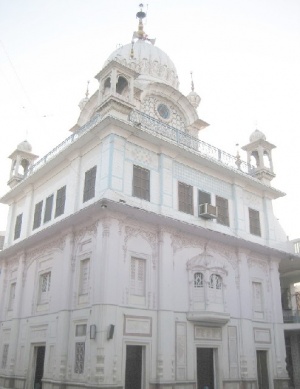 Gurudwara Kandh Sahib derives its name from kachchi kandh, i.e. mud wall, which, according to local tradition, stood on this site at the time of Guru Nanak's marriage. It is said that as the wedding party arrived and stopped a little distance short of Bhai Mul Chand's house, waiting for formal reception by the host.

Guru Nanak sat down close to the wall. An old lady living near by, pointing to the dilapidated state of the wall, told him to move away from the spot lest the crumbling wall should fall on him. Guru Nanak assured her that there was no cause for alarm for the wall would stay intact for a long time.

The wall so consecrated by the Guru became an object of veneration for the devotees who also constructed a memorial platform near it. A symbolic mud wall, neatly plastered, 3 x 5 x 1.5 feet approximately, encased in glass, next to the Guru Granth Sahib at the ground floor, now represents the original wall.

The shrine was maintained in a private house by a line of resident priests until it was acquired during the 1950's by the Seva Committee Gurdwara Kandh Sahib. The foundation of the present building was laid on 17 December 1956. Standing in a marble-paved compound about 2 metres above the street level, it consists of a 10 metre square hall, with a square sanctum in the middle. The room at the second floor level is used for continuous readings of the Guru Granth Sahib. 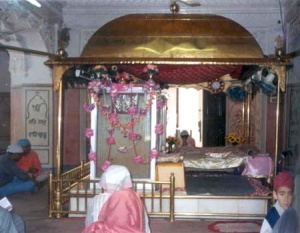 Above it and over the sanctum is a room with a dome covered with white glazed tiles and decorated with a tall goldplated pinnacle and umbrellashaped finial. Arched copings decorate the top room and decorative pinnacled domes surround the central dome, while square domed kiosks at the corners adorn the top.

The verandah to the left, as one enters, has wall paintings depicting scenes from the life of Guru Nanak. Guru ka Langar is across the street, opposite the main entrance. The Gurdwara is administered by the Seva Committee Gurdwara Kandh Sahib. Largely attended congregations take place on every full-moon day.

All major anniversaries on the Sikh calendar are observed, but the most important function of the year is the fair held to mark the marriage anniversary of Guru Nanak on the seventh day of the light half of the lunar month of Bhadon (August-September) .