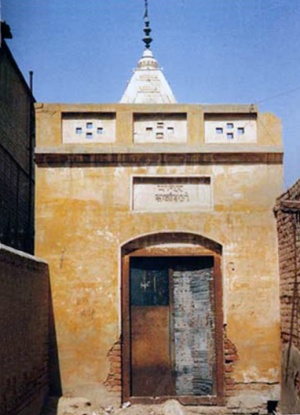 Gurdwara Kali Devi is situated in Topanwala on the main road just beyond the crossroad. Workshops have closed in the former temple to Kali , but its spire can still be seen hanging over the surrounding structures from the street and alleyways.

It is said that when Jagat Guru Nanak Dev Ji came to this city during the course of his fourth world travels that this temple or Mandir was used for the worship of Kali, a Hindu Goddess .

Guru Nanak Dev stayed at some distance from the temple of Kali, but the moment he entered the town the murti of Kali is said to have toppled to the ground. The priest lifted the murti and attempted to prop it up, only to watch it fall again. Some one, watching this sight from the side, posited:

"A sant has come here and maybe this is happening due to his presence."

The priest went to him. Guru Nanak Dev Ji explained the meaning of one Lord to him and advised him to be one of His devotees. After this incident the worship of idols was abolished and Prakash of Guru Granth Ji was begun.

But the lure of old habits and ways fits one like a pair of well worn shoes, so as time passed the the priests once again placed the idol of Kali Devi. This temple has come to be known as Gurdwara Kali Devi to commemorate this event. A school is presently housed in the premises where the SGGS is now absent.