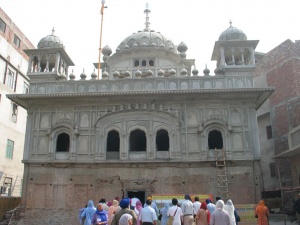 This is that holy historical place where Guru Ram Das was born on 24th September, 1534 (25 Asuj, Samwat 1591) to Sodhi Hardas Ji and Mata Daya Kaur. The Satguru spent first 7 years of his life here. This place is situated inside Delhi Darwaza, near Purani Kotwali Chowk in Chuni Mandi.

The ancestral house of the Guru was small in size, so Maharani Nakain requested to Maharaja Ranjit Singh at the time of birth of Kanwar Kharak Singh, for permission to rebuild this historical place a new. As a result of this, the Maharaja purchased the surrounding buildings from the Qazis and got a Gurdwara of dimensions 122'-6x97'-6 built which was some what similar to the Harimandir Sahib, Amritsar. On the west is an open yard and Nishan Sahib is fixed on the South-West corner.

The Singh Sabha Movement got set-going from this Gurdwara in 1927 A.D. According to Gurdwara act, this Gurdwara came under S.G.P.C. Management.

At the time of partition eighteen Sikhs faced martyrdom there.