Gurdwara Gwari Ghat Saheb is located at Gwarighat which is a famous stepped embankment (a ghat) alongside the river Narmada in the city of Jabalpur in Madhya Pradesh, India at Coordinates: 23°6'12"N 79°55'30"E. Located almost dead center in India the Gurdwara is surrounded with a very picturesque setting.

Guru Nanak with Mardana (left) and Bala, a woodcut circa 1875

Sri Guru Nanak Dev Ji, the founder of Sikhism, undertook four journeys, also known as Udasis (literally a somber state of mind, here - travels), in order to spread his message. He traveled four times in four different directions from his native Punjab. During his first Udasi (started in 1501 when the Guru was 31 years of age) he traveled to the east and south of India. During his return trip Guru Nanak and his companion Mardana walked along the Northeast side of the River Narmada until they reached Gwarighat near present day Jabalpur where they crossed the river.

Giani Gyan (also spelled Gian) Singh [1], the renowned poet has described the crossing of the Narmada river in his 'Panth Parkash' :

After blessing Vindhyachal, river Narmada was crossed,
Jabalpur and Chitrakoot and Rikhanpur were blessed.

The 'Panth Parkash' also records that this is where Guru Nanak crossed the Narmada River to give sermons to Sarbang Rishi. From ancient times the old road from Jabalpur to Nagpur passed through Gwarighat. Even now there is no other dock in Jabalpur where the Narmada could be crossed. Satbir Singh and the writers of the old Janam Sakhis (witness accounts of lives of Guru Nanak and other Gurus) have also mentioned the blessing, preaching and reforming of several thugs and criminals operating along the Narmada river by Guru Nanak.

Gurdwara (A Sikh place of worship, lit. the Guru's Door)

Gurdwara Gwarighat is on the picturesque South bank of the river. For a long time Sant Tulsa Singh served (did Seva) at this hallowed site associated with Guru Nanak. After Sant Tulsa Singh passed away the Sikh sangat (congregation) of Jabalpur constituted a committee to look after the site.

The Gurdwara complex includes a Guru ka Langar, a serai with rooms for pilgrims and travelers to stay, a small museum with paintings to explain the history of Sikhi and a Homoeopathic dispensary to provide free medical care for the sick and infirm. Every visitor and traveler is cared for lovingly.

A satellite view of the Gurdwara

Gurdwara Gwari Ghat Saheb with its surrounding grounds and support facilities from wikimapia.org

The satellite view is navigable showing the city across the river and the railway. And may even be zoomed out to include all of India where the words Gwari Ghat and Jabalpur dissapear under the word India. 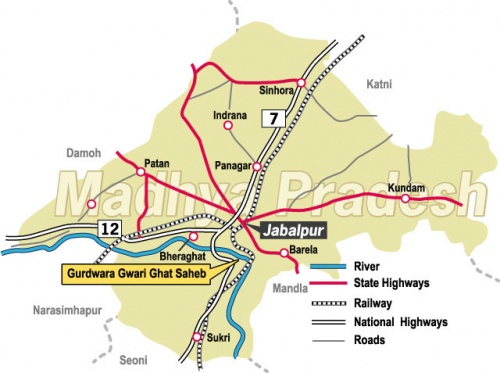 From Jabalpur both highways and a narrow guage railway, which can be crowded at times, lead to Gwari Ghat. The train station is across the river from the Gurdwara. Ferries cross the river and travel as well to the local 'Marble Rocks' area.