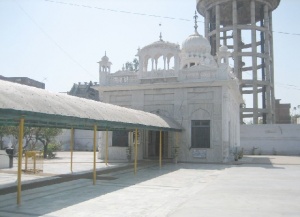 Gurudwara Shri Guru Ka Baag is situated in the Sultanpur Lodhi a city in Kapurthala Distt. This sacred place was Guru Nanak Sahib's residence and the first place in Sultanpur Lodhi where Guru Sahib and his new wife Sulakhani came after his sister Bibi Nanaki's husband Jai Ram ji had arranged a job for him as an accountant in charge of the stores of the Muslim governor of Sultanpur Daulat Khan Lodi. Both his sons Baba Sri chand ji and Lakshami Chand ji were born here. Guru Sahib used to have Langar prepared by Bibi Nanaki ji. The well (Khooh), from which water was drawn for Langar prepartion, is still located here. Guru Nanak would work during the days, but early in the mornings and late at nights, he would meditate and sing hymns accompanied by his childhood friend Mardana, a Muslim who played the rebab ( a string instrument). Their sessions attracted a lot of attention and soon many people started joining the two. It was here that Guru Nanak dissapeared for several days, much to the consternation of his family and friends. After returning Guru Nanak soon sold his personal belongings and, after he had arranged for his family to be cared for, he and Mardana set out on his first udasi.