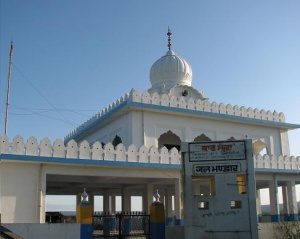 Gurdwara Guru Gobind Singh Sahib Patshahi Dasvin is a sikh shrine present in a village Saluri in Una District of Himachal pardesh. The shrine is associated with the tenth master of sikhism Shri Guru Gobind Singh.

Guru Gobind Singh stayed here on his way to Nadaun in 1691. The commemorative shrine on top of a small hillock on the left bank of Suan River is a small domed room built in 1829 by mason Naudh Singh with funds provided by Maharaja Ranjit Singh. It is named Gurdwara Guru Gobind Singh Sahib Patshahi Dasvin.

Saluri village is 16 kilometers north of Una along the Una - Amb road. It is affiliated to the Shiromani Gurdwara Parbandhak Committee as unscheduled Gurdwara No. 538, but is administered by the followers of Sant Seva Singh Anandgarhwale who renovatied it.