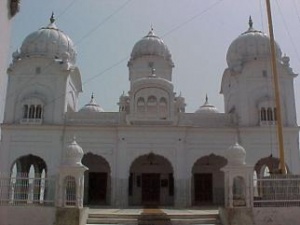 Gurdwara Dhamtan Sahib is situated about 10 KM East of Narwana on the Narwana-Tohana road. Dhamtan is the corrupted name of Dharamsthan (religious place).

It is said that this place was the location of the ashram of Rishi Valmiki (Balmiki) and, as well, the place where the Asvamedha yagya of Lord Rama was held.

Guru Tegh Bahadur, the ninth Sikh guru stayed here on his way to Delhi and the fort styled gurudwara was later built in his memory. There is also another gurudwara located nearby known as Gurdwara Manji Sahib.