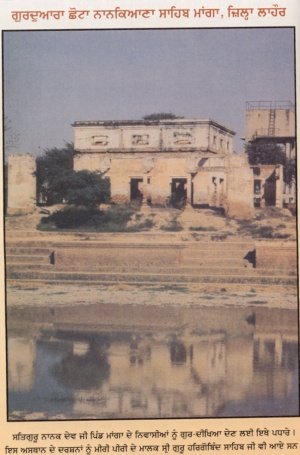 This village called Manga is located on Lahore-Multan road about 35 kilometer from Lahore. The Gurdwara can be seen standing beside Aligarh School even before Manga Bus Stop. There is a Chota Nanakiana in this village at the site where Sat Guru Nanak Dev Ji had stayed. 135 ghumaon of land is endowed in the name of gurdwara, 50 acres of this land is exempted from land revenue. The priests were Sikhs and a fair used to be held on Viasakhi.

Guru Hargobind Ji had stayed at this place while he was coming back from Nankana Sahib. The Gurdwara was built like a Daak bungalow (govt rest house). There is a large pond which is now with the Department of Fisheries. The building of Gurdwara was burnt down by refugees settled here during 1947.

The land belonging to the Gurdwara is in the possession of Late Justice Maulvi Mushtaq who built Aligarh Public school on this land.