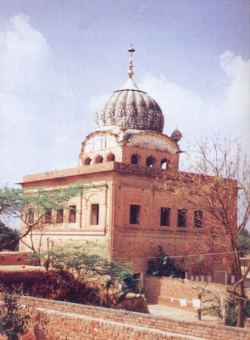 This Gurdwara is displaying its splendour in the village Padhana located outer west to the village, near Police Station Barki, district Lahore.

Sixth Sikh Guru, Guru Hargobind Ji (1595-1644) arrived in this village from Dhilvan due to the love and affection of the villagers. During his stay, he talked about Sat Gur Ji with a Jat of Sandhu clan named Jalhan Jat, a prominent land lord of the village.

Initially Gurdwara was built in a simple pattern. Sardar Attar Singh of Padhana, the cheif of this village, started the reconstruction of it, and with the efforts of villagers a beautiful building was erected. A local committee used to arrange for the Langar.

During the 1947 partition of Punjab region, The Sikhs masses had to leave the Historic Gurdwara of Chhevin Patshahi. It was then occupied by the Mewati muslims from Haryana area, who settled in the Interior of the Gurdwara, as the years went the building started to become in the state of Neglect.

The premises of Gurdwara is now occupied by the Muslim refugees from Mewat region of Haryana and Rajasthan, the building is in good condition but it can deteriorate if proper care is not taken.