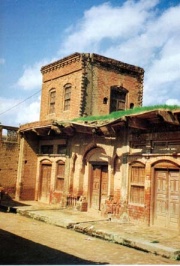 This village going by the name of Bazurgwal is located on the Gujrat-Bhimber road at a distance of about 24 kilometers from Gujrat. Lala Musa is its railway station and tehsil headquarter. The village can be approached from here.

There used to be three Gurdwaras in this village but none of them survived undamaged. Two have been wiped out completely while some marks of this historic place remain but you cannot say that its a Gurdwara until the same is specifically pointed out.