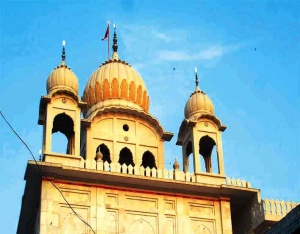 Located in the scenic Indian state ofJammu and Kashmir, Rajouri is a district of composite cultural heritage, in which people of various castes and creeds live in a cordial atmosphere. The Sikh population in the district is about 15000.

This tiny minority comprises only 2.42% of the total population of the district. However, the Sikh community of Rajouri has maintained their distinct identity and cultural heritage. A number of Gurdwaras exist in the district, but Gurudwara Chatti Padshahi Rajouri is a very important religious place which has been constructed in the memory of 6th Guru Hargobind Sahib ji (1595-1646) who stayed at this place in 1616 AD when he was on the way to Kashmir along with the Caravan of Emperor Jahangir.

Raja Tajuddin Khan a.k.a. Raja Chatter Shena, a Jarral Rajput Raja of Rajauri was the ruler in 1616 AD. When he heard of the pious man Guru Hargobind Sahib, he personally paid visit and issued orders for his comfortable stay as his personal guest. The 6th Guru was very happy with the Jarral Raja of Rajauri.

As per the legend, once Guru Hargobind Sahib Ji Maharaj had a dream that Mai Bhagwanti (popularly known as Mai Bhagpari) in Kashmir had prepared a cholla (long shirt) for Guru Ji and she was praying to God for the glimpses of Guru Ji so that she could present it to him, as she was too old and not in a position to visit Punjab and fulfill her aspirations. Therefore, Guru Ji decided to visit Kashmir and take present from the devotee Mai Bhagwanti and to preach Sikhism in the mountainous belt of Peer Panchal and Kashmir.

As per the inscription in Gurudwara Sahib Nowshera, Guru Hargobind Sahib Ji entered Rajouri district in the year 1616 AD. Firstly, Guru Ji reached Jhangar and stayed in a house of a Brahman namely Jhangir Dass. (Later on, the name of the area also became Jhangar). At Jhangar, Guru Ji also met Bawa Beeram Shah Ji Dutt and after detail deliberations with Bawa Beeram Shah Ji regarding the religious matter, Guru Ji selected him for preaching of Sikhism in the foothills of Panchal range starting from Poonch to Dharmasal in Kalakote and posted him at Jhangar.

Guru Ji then came to Nowshera along with the Mughal Emperor Jehangir. The Emperor's Darbar was set up in Nowshera fort while Guru Ji preferred to stay with the people living opposite Nowshera fort. Presently, a well-designed Gurudwara is being constructed at that place in the memory of the visit of Guru Ji.

After relaxing at Nowshera, the Mughal Caravan left for Rajouri via Chingus Sarai. At Rajouri, Emperor Jahangir camped at Baradari opposite Rajouri town on the bank of Salaini Nallah which was constructed by the great Irani Engineer Ali Mardan Khan on the orders of the Mughal Emperor. However, Guru Hargobind Ji stayed in the house of a Sehajdari Sikhim, in the town that opposite the Sarai that was constructed by the Jarral Rajas of Rajouri (Presently, this Sarai is being used as police post).

Crowds at the Darbar of Guru Sahib Ji

When the people of Rajouri came to know about the presence of Guru Ji in the town, they started gathering around him. It is said that the gathering at the Darbar of Guru Ji was much bigger than the gathering at the court of the Emperor. Soon when the news that the people of Rajouri, were crowding the Darbar of Guru Hargobind Ji, rather than visiting his Darbar was brought to the notice of the Emperor, who soon sent a message to Guru Ji, requesting that he come stay with him.

But Guru Ji replied that he wanted to stay with the people so that he could continue to share the teachings of the Sikh Gurus, with the crowds at his Darbar. Guru Ji stayed at Rajouri for a few days, continuing to share the spiritual thoughts of Guru Nanak Dev Ji Maharaj. The Guru's extended stay at Rajouri resulted in a sizable number of people becoming Sikhs. Soon the new devotees constructed a small Dharamsal, as Gurudwaras were known in those days, in memory of Guru Ji's stay in Rajouri town.

With the passage of time, Rajouri witnessed a number of political developments, but nobody disturbed this Gurudwara. During 1931-32, Rajouri tehsil was a part of the Reasi district when the Wazir-e-Wazarat of the district was Sardar Tirath Singh ji, who used to visit Rajouri for administrative purposes. When people told him about the importance of Gurudwara Sahib Chatti Padshahi Rajouri, it is said that Sardar Tirath Singh collected funds from the public and started Karsewa for the construction of Gurudwara Sahib. He himself lifted stones from Salani Nallah for the construction of the Gurudwara. Therefore, a Pacca Gurudwara building was constructed during 1931-32. Even though the new building was fairly small, it only had room in the Dewan Hall for 60-70 persons, it was a double storey building that was, in those days, known as a Bangala, therefore, the Gurudwara was known as Gurudwara Chatti Padshahi Bangla Sahib Rajouri. During the violence of 1947 when tribal forces attacked the area, trying to win J & K for Pakistan, more than 70% of the buildings of Rajouri town were destroyed, but the Gurdwara built in memory of Guru Ji's stay in Rajouri town remained intact.

In 1960, a memorandum was passed by the Sangat for the re-construction of Gurudwara Chatti Padhshahi Rajouri and the committee was asked to work for the construction and collection of funds. For this purpose, the prominent persons of Rajouri town were included in the Committee and a separate construction Sub-Committee was constituted.

In 1964, the blue print of new Gurudwara was prepared by an Engineer Sardar Tara Singh of Punjab who was working in MES as SDO and was posted at Rajouri at that time. After the approval of blue print by the Sangat, the construction was started in 1964. The masons and carpenters were brought from Punjab for giving Sikh architectural touch. By this way, the first phase of the building was completed. The four storey Gurudwara has accommodation of 15 rooms for Yatries apart from a big Dewan Hall.

Even though there are only 21 Sikh families residing in the town, with a scattering of other Sikh families living in the villages of Saranoo, Bathuni, Mera, Sawni, Gurdhanbala, Sadhyal, Dehrian-Tralla, Chityari and others in the area, Gurudwara Chatti Padshahi also has great importance for the Hindus of the area, as well. A number of Hindu devotees visit this Gurudwara for offering prayers. Therefore Gurudwara Chatti Padshahi Rajouri has come to be considered the symbol of communal harmony in the area apart from its religious importance.

The main congregation is organized on Sunday. The Birthday of Guru Hargobind Ji Maharaj is celebrated with great enthusiasm jointly by Sikhs and Hindus every year.

Once a region of great importance the valley was part of a kingdom known as Panchal Desa, with a ruler said to have been related to the Pandavas. First named as Rajapuri – ‘the land of Kings’ - the city is mentioned in the travelogue of the Chinese traveler Hiuen Tsang who visited here in 632. Rajouri, Bhimber and Naushera were included within the territory of Abhisar, which was one of the hill states of the Punjab Kingdom under Maharaja Ranjit Singh. After the British took control of the Sikh Raj in 1846, they sold the Kingdom of J & K to Raja Gulab Singh who was then designated as the Maharaja of Jammu and Kashmir.

After Independence, Rajouri became part of the newly constituted Poonch-Rajouri District. On Ist January 1968, Rajouri emerged as a new District on the map of the State.

Photos with thanks to Autar Mota