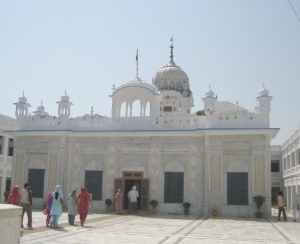 Gurdwara Bebe Nanaki Ji is situated in the Sultanpur Lodhi City of Kapurthala Distt. This sacred place was residence of Bibi Nanaki ji. constructed in 1970's, honours the memory of Bebe Nanaki, elder sister of Guru Nanak. The actual house, a threestoreyed old building where Bebe Nanaki is believed to have lived with her husband, Jai Ram, is inside the old town in Mohalla Chhimbian. But the premises being in private possession, a public monument (cornerstone, laid on 13 November 1970) was raised in the form of a gurdwara by Bebe Nanaki Istri Satsang Charitable Trust under the chairmanship of Bibi Balvant Kaur of Birmingham (United Kingdom). The Gurdwara Bebe Nanaki JI comprises a central hall, with the Guru Granth Sahib seated in a white marble palaki at the far end. The Guru Granth Sahib is also seated in a small sideroom symbolizing Bebe Nanaki's own lodging. Over the sanctum, above the hall roof, is a square domed room with arched copings. Bulbous domes adorn the corners of the hall roof. This Gurdwara was in the news in the recent past because of neglect by the Gurdwara authorities regarding the knowledge of heritage preservation during the beautification of this shrine as the original house of Bebe Nanaki Ji was destroyed during the construction process and was replaced by marble work**.