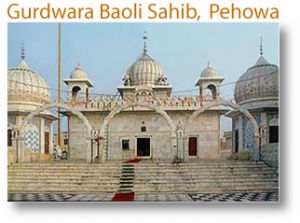 Gurdwara Baoli Sahib located in Pehowa is dedicated to the memory of Guru Nanak Dev Ji. When he came here, the local pandits enjoyed absolute hegemony. They had by their religious tricks kept the people under sway. They would loot the devotees who came to this place. They had made a gold ear-ring of the size of a chariot wheel and thrown it into the river Saraswati. This they would show to the devotees and claim that when the Mata was taking a bath in the river at night, her ear-ring fell into the water and during the course of the night, it grew to such a size.

When Guru Nanak Dev Ji came to know of this, he admonished them by saying that while it was fine that by their ruse, the gains from public offerings had multiplied, but that they should think of was the multiplication of the sins of those who used this money to spend on festivities. The pandits had no answer to this.

Soon the pandits realized their mistake and sought forgiveness from the Guru. Guru Nanak Dev stayed here for a long time. He spent his time meditating and preaching to the people.

Additional Gurus Who Visited the Site

A main Building with a Sarovar, Bhora Sahib (a meditation chamber in the basement), Diwan hall and a Darshani deori (entrance passage) has been constructed here. A museum, langar hall and guest house have also been constructed. Renovation work is going on for Baoli Sahib.