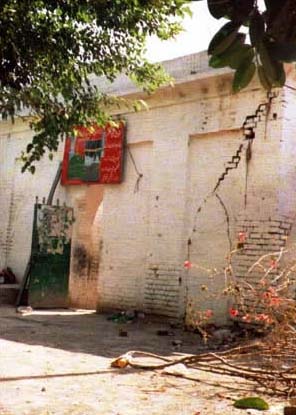 This sacred shrine of fifth Guru is situated in Rang Mahal Bazaar of Lahore city at the back of the Sonehri (Golden) Mosque. The compiler of "Tawarikh-e-Guru Khalsa", giving a historical account of this shrine, writes, "At the time of departure of Guru Sahib to Lahore a big dispute was on. A Pathan of Bukhara was leaving on an expedition and in haste, he entrusted a purse containing 142 gold coins to the charge of Chajjoo Bhagat. He had opened his shop just then and his clerk had not arrived as yet. Chajjoo took the purse and placed it in the safe and forgot all about it. The Pathan returned after a lapse of many months and demanded back his money. Chajjoo denied outrightly since there was no entry of this transaction in his account books. The case went to court of governor of Lahore and the Pathan lost the case. It so happened that after a few days. Chajjoo found the purse of Pathan while he was checking and cleaning his safe. He immediately went to the Pathan with his purse as well as a gift of a shawl and apologised. The Pathan refused to accept the purse saying that he had lost his claim and as such' had no right over it. The dispute came up before Guru Arjun Dev Ji, when both of them refused to accept the money, he decided to build a baoli (stepped well) in Dabbi Bazaar with this money in Samvat 1616. In Samvat 1685, this baoli was got filled with earth. During the reign of Ranjit Singh the baoli was restored in Samvat 1891 when a florist informed him about it. This baoli has once again been lost, only a small garden remains with shops around it where the people take rest.