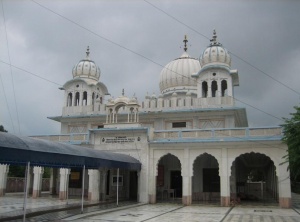 Gurudwara Badshahi Bagh, near district courts Ambala city, commemorates the visit of Guru Gobind Singh who stayed here while coming from Lakhnaur, where he had gone to meet his maternal grand parents. He stayed in the garden, under a cluster of trees. A tank has also been built near the Gurudwara Badshahi Bagh.

Gurudwara Badshahi Bagh commemorates the visit of Guru Gobind Singh Ji, the Tenth Guru, who visited this place around 1670 during one of his excursions to Lakhnaur. While on a hunting trip one day on his horse, he came to a big garden just outside the city of Ambala. Then only a small child of eight years, he had with him his white hawk as well. The garden belonged to Pir Amir Din, the custodian of the Muslim shrines of the city. He happened to be present in the garden at the same time. Pir Amir Din had with him a black hawk. On seeing Guruji’s white hawk, the Pir took a liking to it and began thinking of how to take it himself.

He suggested a challenge to the Guru for a fight between the two hawks. But, Guruji realizing the real intention of the Pir, refused and said that instead of the hawk, he would make sparrows fight the Pir’s hawk. The Pir laughed and said that sparrows were food for his hawk, but Guruji repeated his words. With this, Guruji called upon two sparrows that were sitting on a tree to fight with the hawk. The sparrows fought so ferociously that the hawk was injured badly. It finally fell to its death about a kilometer away, near Labbu ka Talaab, the site of Gurdwara Gobindpura. The Pir realized his folly and built a platform in honor of the Guru. It is here that Guru Gobind Singh uttered his famous words: 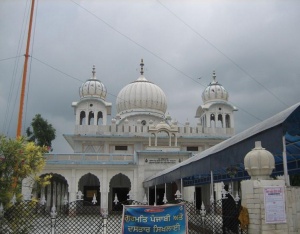 Every year a big festival is held here on the Baisakhi, regarded as the birthday of Khalsa Panth. Keeping in view the historical importance of three holy shrines, Haryana Tourism has set up a new tourist complex 'Kingfisher; at a strategic site on the main highway.

This complex has 10 air conditioned rooms, a restaurant, a bar, a swimming pool and all other ancillary recreational facilities. The tourists on their way to Simla, Chandigarh and Bhakra Nangal by road, enjoy the facilities provided in this complex.

The Gurdwara was also established by Sardar Mehar Singh of Nishananwali Misl. Gurdwara Badshahi Bagh was destroyed by British shelling on a rebel force during the 1857 mutiny. It was rebuilt only in 1931 by Sant Gurmukh Singh of Patiala. Its present building is however the result of another reconstruction, this time by Sants of the Nirmala sect who are still managing it. The present building of Gurdwara Gobindpura is also a product of post-independence era.

Gurudwara Badshahi Bagh Sahib is situated on the Ambala-Hisar Road, near the District Courts, Ambala City